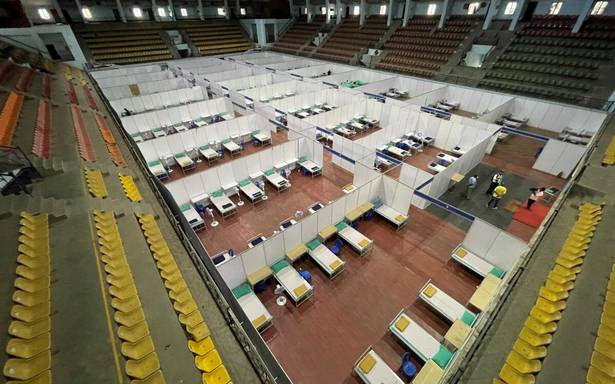 ‘It is unfortunate that people are spreading unverified information, which will affect COVID-19 positive patients who are on the lookout for beds or admission in the CCC,’ says a doctor.

While the private hospital bed management system is plagued by lack of transparency and the one managed by the civic body over-run with requests and long wait time, the triage and COVID-19 Care Centres (CCCs) are facing an altogether different problem: misinformation and unverified updates by private citizens and NGOs on available beds.

For instance, though the CCC at the Koramangala Indoor Stadium has not yet been thrown open to the public, people started knocking on its doors after they received forwards claiming that the facility had oxygenated beds.

A doctor helping the Bruhat Bengaluru Mahanagara Palike (BBMP) with oxygen concentrators for the CCC at the Koramangala Indoor Stadium highlighted the problem in a video. He pointed out that certain people were spreading false information about the availability of oxygenated beds in the 250-bed facility. “When the pandemic is raging in the country, it is unfortunate that people are spreading unverified information, which will affect COVID-19 positive patients who are on the lookout for beds or admission in the CCC,” he said in the video.

Such incidents are proving to be a headache for the BBMP, which has, to date, set up 48 CCCs and physical triage centres across the eight zones in the city. Of the 2,714 beds in these facilities, 860 are oxygenated and remaining are regular beds. BBMP Joint Commissioner (Solid Waste Management) Sarfaraz Khan told The Hindu that all these facilities had been established by the civic body alone. “Citizens, who have tested positive, can just walk in to any of the 48 facilities for physical triage and admission in either the stabilisation centres or CCCs,” he said.

He admitted that some non-governmental organisations were assisting the civic body with the procurement of oxygen concentrators. However, the 48 CCCs and triage centres were being completely managed by the BBMP, he reiterated. “The civic body is getting pulled into needless controversy,” he remarked.

To dispel any further miscommunication on availability of beds, the BBMP has decided to make public all the information related to the CCCs and triage centres, apart from putting up boards outside the various facilities.

Apart from the BBMP-run CCCs, there are others run by private companies, apartment complexes, etc. “We have no control on admission in those facilities,” said Mr. Khan.