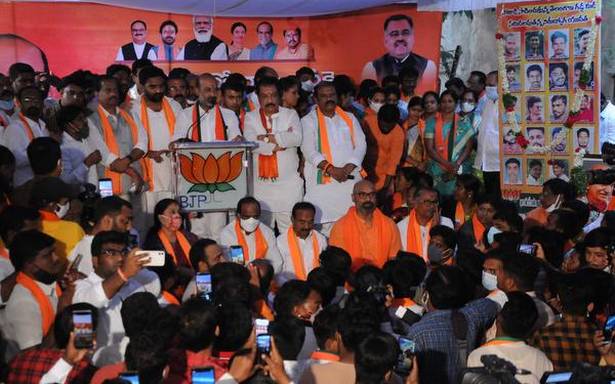 State BJP president and MP Bandi Sanjay Kumar warned that if the TRS government does not issue jobs notification by next month, the party in association with the unemployed youth associations, will lay siege to the Legislative Assembly and will not let it run. “Our three MLAs inside will root for the cause of the unemployed youth,” he said.

Neither the unemployed youth, waiting in vain for the job notifications nor the employees, who played a stellar role in separate Telangana agitation, and now under duress due to the ‘whimsical’ zonal transfer policy of the government, are happy, he claimed and wondered if sacrifices made for statehood had any meaning when there are no jobs for the youth.

The BJP leader was addressing partymen after his one-day protest fast demanding the government to immediately issue jobs notifications and fill up the existing vacancies. “There has been no Group 1 notification for the last seven years and not a single vacancy was filled in last three years. Why is Mr. Rao so angry with the youth? Where are the employee unions? Why are they so silent when every employee family is suffering,” he asked.

Earlier in the day, police prevented many leaders from converging at the venue by putting them under house arrest. The party was also forced to shift the venue from Dharna Chowk at Indira Park as the police refused permission citing COVID control rules issued by the government.

Mr. Chugh said except for family and the kith and kin of Chief Minister K. Chandrasekhar Rao, none had benefitted during the TRS rule.

“Our party understands the frustrations of the youth and other sections in Telangana with this government. We are ready for any kind of debate with Mr. Rao in any forum and any place about his rule vis-a-vis with that of Prime Minister Narendra Modi,” he said.

“Except for his family no one else benefitted in ‘Bangaru’ Telangana. Hundreds of contract employees have been thrown out even as not a single step has been taken to fill the more than one lakh vacancies. People of Telangana are no longer ready to tolerate this. We will force the government to fulfil its forgotten promises, including stipend to the unemployed youth,” said the general secretary.

Former MP Vijayshanti criticised the government for trying to put curbs on those wishing to participate in the protest. She advised the youth to take up the struggle against the current government for their employment right and not resort to extreme acts. “We need the same commitment and courage as was shown during the separate TS agitation,” she said and urged the employees to consider taking up lunch hour demonstration in support.

Mr. Rajender accused the Chief Minister of being a ‘coward’ and spreading canards about the Central government over paddy procurement stating that the latter will pay a heavy price soon. Secretary Premender Reddy presided.