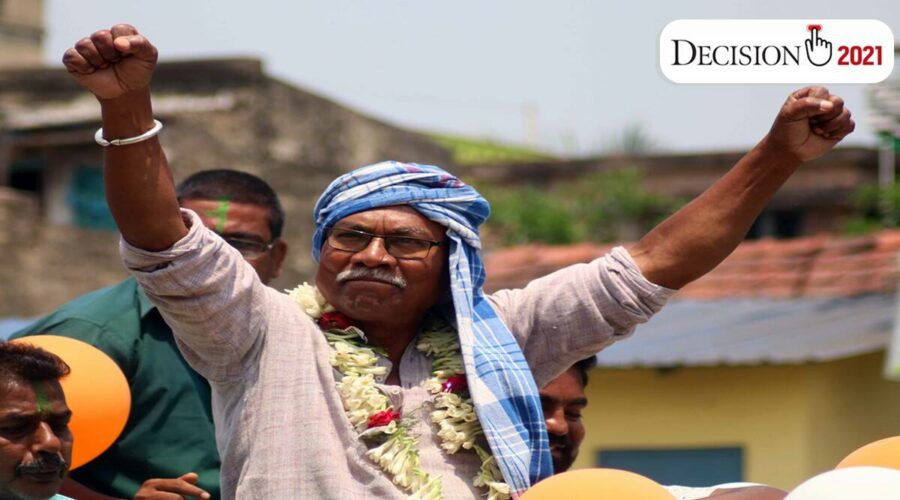 For a good part of his life, Byapari has done a series of odd jobs, from a tea shop worker to a dom in cremation grounds, and is best known for putting into writing those experiences of poverty and discrmination that made him one of West Bengal’s most prominent Dalit authors. 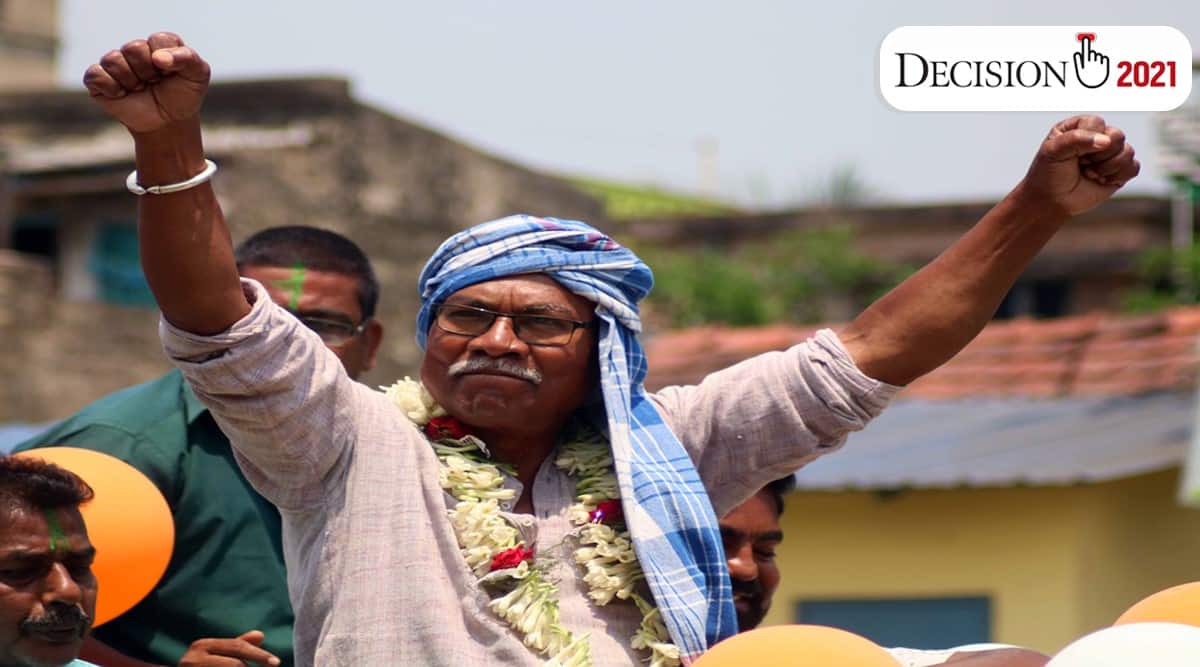 “Manoranjan Byapari is an everyman,” says the 70-year-old, a first-time Trinamool Congress candidate from the Balagarh constituency in Hooghly, about himself. Walking down the street in white khadi kurta and a blue checkered gamcha around the neck, his attire helps him play the part of ‘everyman’ almost too well.

For a good part of his life, Byapari has done a series of odd jobs, from a tea shop worker to a dom in cremation grounds, and is best known for putting into writing those experiences of poverty and discrmination that made him one of West Bengal’s most prominent Dalit authors. Then this year, the call came to back Mamata Banerjee’s party in the West Bengal Assembly elections and Byapari jumped headfirst. He was fielded from Balagarh, replacing sitting MLA Asim Majhi.

Days before Balagarh goes to polls on April 10, Byapari is busy campaigning in Kuntighat, a small village in Hooghly some three hours from Kolkata, where Kesoram Rayon’s factory is a major source of income for daily-wage earners. A train of autos—totos—filled mostly with women and a handful of men follows Byapari as he begins his mid-day campaign rally. Although Byapari is campaigning for the TMC, the supporters here have come for their Didi—Mamata Banerjee.

“Everyone wants Didi to win. She has done a lot for the people here,” says 41-year old Vinay Mondol. “Didi will win,” he adds with conviction. The two women sharing the auto with him agree. “The roads were terrible here. Didi fixed them. In the interiors of the village, the roads were just mud and we couldn’t even take bicycles,” says 50-year-old Anima Mondol.

At the local TMC office, a few party workers are waiting for Byapari to finish his first round of campaigning for the day. Despite Byapari’s visibility in Kolkata’s literary circles, nobody in this constituency had heard of him till two months ago when his candidature was first announced, not even the local party workers.

“One month ago, we distributed pamphlets explaining his life’s work and struggles in each neighbourhood,” says 66-year-old Mrinal Kanti Ray, a TMC worker. “Last month, I saw his photo with Mahashweta Devi. People here have sympathised with him and that is why we are supporting him.”

In November last year, the TMC’s election strategist Prashant Kishor submitted a survey of 294 Assembly constituencies in the state, according to which retaining 58 seats out of the 84 reserved for Scheduled Castes and Scheduled Tribes would be critical for the party in West Bengal. The Balagarh seat is reserved for Scheduled Castes and in the Lok Sabha polls, the TMC had trailed by some 34,000 votes here.

But Byapari’s candidature isn’t a masterstroke as some political analysts are making it out to be, says Subhajit Naskar, Assistant Professor of Politics at Jadavpur University. “Balagarh doesn’t have a rich history for the Dalit community. Byapari is being fielded because there is anti-incumbency against the sitting MLA (Majhi),” he says.

In addition, it is also the exploitation of Byapari’s visibility as a literary figure in the urban, upwardly mobile Dalit community, Naskar believes. “He is one of the most iconic, visible figures that the TMC could have chosen. So there is politics of tokenism behind his candidature with a purpose to pamper Dalit, urban, upper-middle class voters.”

None of Byapari’s supporters in Kuntighat interviewed by The Indian Express have read his writings and know nothing of his life’s work and struggles beyond what was mentioned in the political pamphlets distributed last month. “His literature, work are not widely read by the masses on the ground, but the chant of the upwardly mobile middle class and caste-related factors are getting traction in Bengal. There is a larger picture here—so to pamper their sensibilities, Byapari has been chosen by TMC,” Naskar adds.

When asked why he decided to enter the realm of politics after having stayed away for years, Byapari has only one answer— Mamata Banerjee. “I stood from this seat because Didi felt that this constituency was fit for me to fight from. Second; this is an SC seat. I am a member of this community. I am a Namo (Namasudra), my father was a Matua,” says Byapari.

“This year I came into politics because our culture, our language, our community, is all about to be destroyed because of the attacks by our enemies. When the British traders came here, they made us slaves for 200 years. Now the Gujarati traders have come here and want to make us slaves again,” Byapari says, in a reference to Prime Minister Narendra Modi, Amit Shah and the BJP.

“In Bengal, all communities live together, without any enmity and discrimiantion. They want to destroy that for the benefit of business interests by mixing with looters like Adani, Ambani. Today, I cannot tell my pen ‘you write stories’. That is why I had to step into politics. That is why I had to enter the battlefield,” he adds.

Naskar has been following Byapari’s candidature closely and says he doesn’t appear to have concrete plans for the constituency. “I don’t want to work for causes, but I want to fight for them,” Byapari tells The Indian Express. While he says that he will formulate agendas only post the election results, one of the causes he says he wants to “fight” for is improving health centres in the constituency, by bringing doctors to existing centres and developing centers where there aren’t any.

Byapari’s candidature has resulted in divided opinions among many in the Dalit community in West Bengal, says Naskar. “There is a section that believes that Byapari is not concerned about the poorest of the poor Dalits, like the Dalits of the Sunderbans, or the Dalits in rural centres. Byapari is silent about them.”

Byapari says that he believes that politics will give him a platform to do something for the people from whom he finds inspiration for his characters in his writings. “I have written about people living in destitution and have seen their lives very closely. Earlier I had only written about their pain and anguish but I couldn’t do anything for them. My life was like that. I mixed experiences from my own life and that of others and wrote books, and got royalties. But I couldn’t do anything for those people because I didn’t have the capability to do so,” Byapari says.

“There is no difference between the characters I write and me,” he says. Pointing out to the street from his small party office, Byapari says: “Oi je (there), the boy standing near the tea shop on the street corner washing used glasses, is me. That man carrying piles of bricks on his head is me. The man driving a tempo, that is me. The woman washing utensils under a public tap, that is my mother. There is no difference between the ordinary man and me. When writing a story, an author will invariably add his own experiences. I will remain an author. In the soil and grass of Balagarh, I will write a new history.”

After a pause, Byapari adds: “I am a footpather gunda (a strongman from the streets). Bhadralok won’t be able to manage such people (BJP).”