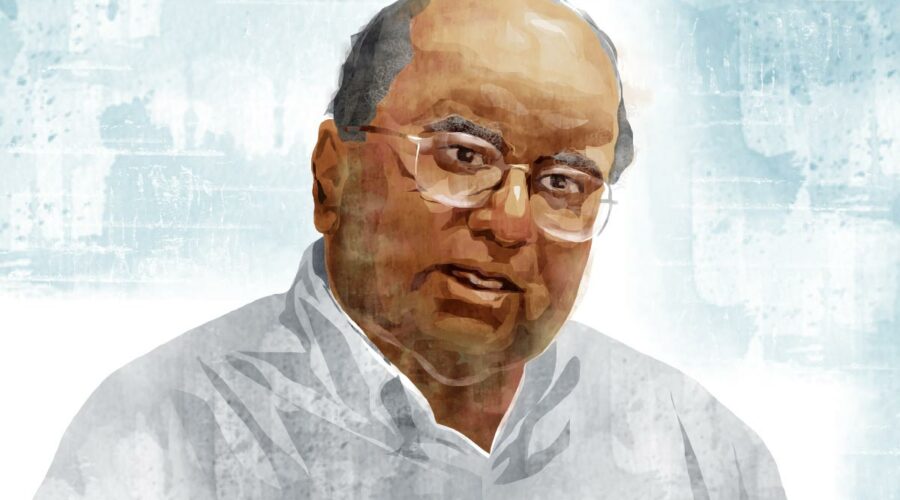 ‘Those who worked with him or came to know him rated him as one of our best, with a sharp intellect, unfailing courtesy and ready wit.’
Ambassador T P Sreenivasan fondly remembers Ambassador B S Prakash, wonderful human being, unusual diplomat and long-time Rediff.com columnist who sadly passed away into the ages on Monday, October 4, 2021.

The tributes which poured in on the demise of Ambassador B S Prakash highlighted his charming personality, professional competence and incisive, but gentle prose.

The loss of his wife, Ratna, a civil servant herself, and his debilitating illness added a particular poignancy.

‘Polished diplomat, superb writer’, ‘gracious in speech and writing’, and ‘quiet, decent, sober and very witty’ are some of the descriptions used by his friends and admirers.

‘God has a lot to answer this one’, said a distressed diplomat.

‘A good man left us well before time’, said another.”

His parting thoughts from Brazil just before retirement speak for itself.

‘Fiqui tranquilo‘ is the Brazilian mantra that I have learnt living here: ‘Keep cool’ is its operational and colloquial translation to do justice to the spirit of Brazil,” was another observation..

The good that diplomats do remain unknown except when they happen to be in the midst of some spectacular situations like wars, military coups or when they occupy top positions.

For the rest, the work is quiet and their achievements are nebulous.

In the case of Prakash, he had a variety of key positions in Uganda, Saudi Arabia, Austria, the US and Brazil and he worked without coming to the limelight.

But those who worked with him or came to know him rated him as one of our best, with a sharp intellect, unfailing courtesy and ready wit.

I met him first when he joined me in the UN Division in the Ministry of External Affairs as my deputy.

His support and friendship were an asset to me as long as we worked together.

We did not work together again, but remained in touch till he fell sick.

The best thing that happened between us was when I introduced Prakash to the Rediff.com editor, for whom I was writing a column, ‘Encounters’ on the celebrities I met during my career.

Prakash was still in service, but he had begun to write some human interest stories and was looking for a suitable publication.

He has been a Rediff columnist ever since and a celebrated one at that.

His style of writing, with deep and serious thoughts and inimitable humour, won him a large audience around the world.

In retirement in Delhi, he pursued his professional interests and kept a steady flow of columns on Rediff and elsewhere.

Even those who did not know him personally said how much they would miss his writings.

As the Consul General in San Francisco, he became very popular in the Indian community, which was largely composed of technologists and managers and he chronicled their achievements with sympathy and understanding.

His scientific temper and humaneness came out clearly in his writings of that period.

A senior colleague recalls that Prakash had, with great foresight, invited the mother of the present US Vice President, Kamala Harris for a dosa meal at the Consul General’s residence.

Once he was liberated from service after a highly successful post as Ambassador to Brazil, he began writing about politics, external and internal, with the same kind of irreverent and biting humour.

I enjoyed the splendid hospitality of Prakash and Ratna in Brasilia, when he invited me to participate in an international conference there.

We rarely met afterwards, but we shared thoughts and ideas constantly till a few months ago.

We became closer in spirit when his daughter was married to a son of my one time student and senior journalist, K P Nayar. His review of my book, Modiplomacy was in his characteristic tongue in cheek style, particularly the Shakespearean prism I used to narrate PM Narendra Modi’s first term in office.

He acknowledged our association in his own style: ‘But for me, he is first a friend, philosopher and a ‘guru’ and not to forget, an erstwhile boss, though he never displayed the qualities associated with that appellation. He wears many hats, Former Excellency, educationist, initiator of institutions, motivator of new bureaucrats, writer and occasionally, recipient of awards.’

Among the many Rediff columns by Prakash, two are worth relishing again.

On his experience of the Literature festival in Jaipur, he wrote: ‘The voices in Jaipur, some literary, some academic, some pedantic, others exuberant, transcending genders and the transgender, young and old, leftist and conservative — whatever they mean, were at the root of making it a festival rather than a conference.

‘It was stimulating, to say the least. There were differing perspectives on everything, history, philosophy, economy, though not so much among the literary types who believed that each experience and opinion had its own legitimacy and should find expression.

‘It was refreshing for me, used to geo-strategic and geo-economic discussions to see the respect and affection given to ‘minor or peripheral’ issues and people.

‘Young writers were excited and exciting. So were others, writing from their oppressed or disadvantaged positions.

‘Revisionist history was a rage. To be unconventional in dress, thought, and manners was conventional.’

In a hilarious take on his visit to Maldives after an attempted coup was thwarted by the Indian armed forces, he wrote, while describing a discussion with local officials on setting up an intelligence outfit: ‘The men who maintain public law and order and catch an occasional thief in Male — or in other words the police in its conventional sense — he said, cannot be relied upon to covertly watch the subversives or identify the enemies of the State.

‘It is a cardinal principle that the police in uniforms are separate from intelligence operatives in civvies, he insisted.

The point was duly understood and noted by our counterparts, but as the discussions progressed something seemed to be troubling them.

‘I think we can identify a capable officer for the Intelligence,’ said their principal security official, who had been tasked to finalise the reorganisation.

‘I believe Mr… is right for the job,’ he told the minister.

‘Well… but he is also the Band Master of the national band,’ the minister replied.

‘But, Minister, surely in moments of national crisis, intelligence has to take priority over the band…’ we said collectively.

‘OK. but in the evenings…. well, he is also our football coach,’ said the minister. ‘Surely, that is a national priority’.’

Ambassador T P Sreenivasan (IFS 1967) is amer Ambassador of India and Governor for India of the IAEA.
A frequent contributor to Rediff.com, you can read his fascinating columns here.