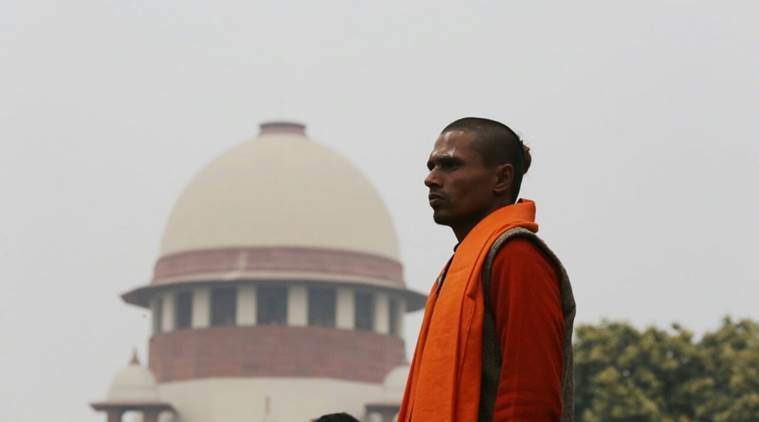 The hearing also witnessed some heated exchanges between the CJI and senior advocate Rajeev Dhavan, who is appearing for a Muslim petitioner. 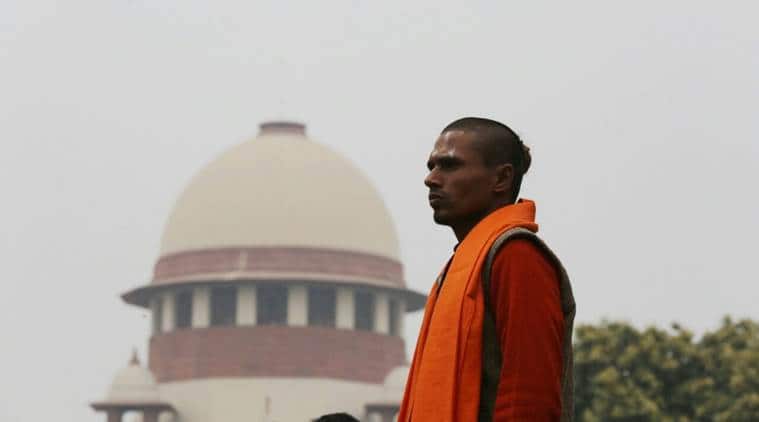 As day to day hearings on appeals challenging the September 2010 ruling of the Allahabad High Court on the Ayodhya dispute began in the Supreme Court Tuesday, the Nirmohi Akhara, seeking control of the disputed 2.77 acres, stated that Muslims had stopped offering Namaz at the Ramjanmabhoomi-Babri Masjid complex in 1934, and only Hindus had been allowed to offer prayers there.

The SC had ordered day to day hearing as its efforts to find an amicable solution to the dispute through mediation had failed to make any headway. The day’s proceedings began with the court rejecting a plea by former RSS ideologue K N Govindacharya to allow audio recording of the hearing or prepare its transcripts.

Fourteen appeals have been filed in the apex court against the 2010 Allahabad High Court judgment, delivered in four civil suits, that the 2.77-acre land in Ayodhya be partitioned equally among the three parties — the Sunni Waqf Board, the Nirmohi Akhara and Ram Lalla.

Senior Advocate Sushil Jain, representing the Akhara which is seeking management and possession of the area, told a five-judge Constitution bench headed by Chief Justice of India Ranjan Gogoi that there was no dispute regarding the outer courtyard until the Sunni Wakf Board filed a suit in 1961.

He said that the absence of a provision for ‘wuzu’, where Muslims wash their hands and body before Namaz, at the disputed site was interpreted by the High Court to conclude that prayers were not being offered there since long and thus it had ceased to be a mosque.

Explained | Where idea of ‘negotiation’ originated, how ‘mediation’ has always failed

Jain read from the September 31 order of the Allahabad High Court even as the bench also comprising Justices S A Bobde, D Y Chandrachud, Ashok Bhushan and S A Nazeer questioned whether the Akhara had filed its original suit within the period of limitation.

The court wanted to know what was the final order from which the limitation period was counted.

Jain said there was no final order and the period was counted from the date on which the complex which had been in its exclusive possession was attached and possession handed over to the receiver.

He also recalled that the Akhara was a well-known one and had protected the Rani of Jhansi after the battle of Jhansi.

The bench also posed questions to the lawyer to understand the map of the complex and disputed area.

The hearing also witnessed some heated exchanges between the CJI and senior advocate Rajeev Dhavan, who is appearing for a Muslim petitioner.

This happened after the CJI asked Jain to confine his arguments to the civil dispute and told him that he could skip reading what was not necessary. This prompted Dhavan to say that he hoped there would not be any curtailment of arguments.

The CJI replied that Dhavan would get his chance and asked him “do you have any doubt”?

Dhavan answered that he was only answering the question put to him by the CJI.

CJI Gogoi then told him that he should remember that he was also an officer of the court and should keep the dignity of the court. “Then don’t ask me such questions,” said Dhavan.

The CJI told him “but there is a way to answer”. An adamant Dhavan replied, “Well, this is my answer”. The CJI went on to clarify that “all I want to say is that we won’t curtail anyone.” And Dhavan’s response, “I hope so.”