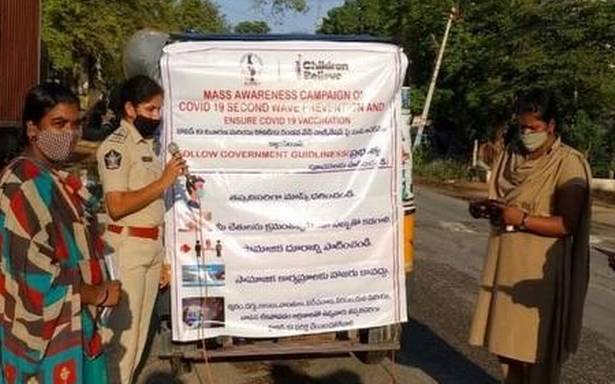 Forest-fringe villages in Bangarupalem mandal reported more than 1,000 cases in one month

The COVID-19 Task Force officials on Tuesday launched an awareness campaign in forest-fringe villages in Bangarupalem mandal about the protocols to be followed to prevent the spread of coronavirus.

Rural Organization for Poverty Eradication Services (ROPES), with the support of a Canadian NGO Children Believe, would oversee the campaign in the mandal, which reported over one thousand COVID cases and 25 casualties during the second wave of the pandemic.

A large number of families from the villages work as migrant workers in Tamil Nadu and Karnataka. Due to the clamping of lockdown there, several families had to return home.

But instead of getting tested for COVID-19 after the onset of symptoms, several of them are said to have been dodging the protocols that has led to an alarming spread in cases and casualties in the last one month.

The Bangarupalem police said two vehicles, fitted with the public address system, would distribute pamphlets to create awareness among the people in the villages. The campaign would focus on the COVID-19 guidelines such as wearing facemasks, washing hands and maintaining physical distancing.

“Several people in the rural side continue to ignore the guidelines, and are getting exposed to the infection. The campaign will urge symptomatic persons to immediately contact the task force field staff for tests,” said a police officer. The focus would also be on dispelling apprehensions among residents on vaccination.