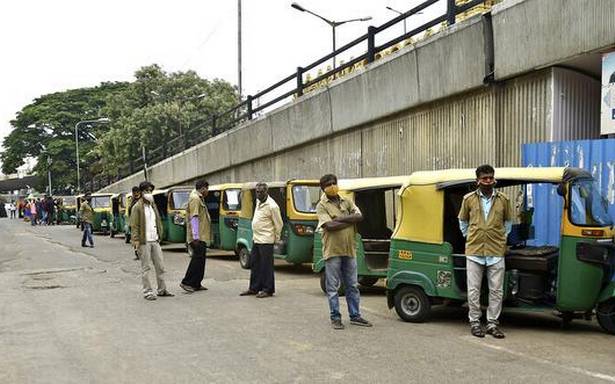 They are sceptical of whether aid will reach them; lorry and pvt. operators upset

Auto and taxi drivers whose earnings have taken a huge hit for the second consecutive year have found the government’s relief package inadequate.

Somashekar, president of Namma Chalakara Trade Union, said: “We have been campaigning for the government to announce a package of ₹10,000 for drivers, relaxing payment of EMIs for at least four months, and waiving taxes, but what has been announced is of no use to drivers.” In fact, drivers have been asking the government to relax taxes for a period of one year.

On Wednesday, the Chief Minister announced ₹3,000 for each driver, for which it has earmarked ₹63 crore. Around 2.1 lakh auto, taxi and maxi-cab drivers are expected to benefit from this.

However, drivers are sceptical of whether the aid will reach them. In 2020, during the first wave of COVID-19 and the lockdown, the State government offered a package of ₹5,000 per driver. “It was offered to 7.5 lakh drivers, but not even half of them received it. Now, the government is saying that 2.1 lakh drivers will benefit in this round, making it evident that a majority will not receive it,” Mr. Somashekar added.

The lockdown has badly affected auto and taxi drivers, who have earned little or no revenue but are saddled with EMIs and other expenditure. “We are finding it difficult to pay for essentials, rent and loans. Last time they announced a package but added riders making it difficult for us to claim the money. This time, they have reduced the amount from ₹5,000 to ₹3,000. Most of us feel that the package announced is insufficient,” said Raghavendra N., an auto driver from Bengaluru.

On the other hand, lorry owners and private bus operators expressed anger with the government for ignoring them.

G.R. Shanmugappa, president of the Federation of Karnataka State Lorry Owners and Agents’ Association, said: “The Chief Minister has ignored us while announcing the relief package. Every month, we pay ₹500-₹600 crore as tax to the government. We demand that the State government announce a ₹5,000 relief package for our drivers, waive taxes, and provide medical insurance. If our demand is not met, we will not take out our vehicles from June 1.”

A senior official said that maxi-cab drivers are also eligible this time around. “We will invite fresh applications. Those who received relief packages are also eligible to receive the compensation this time. Last time, among those who had applied, 2.16 lakh drivers met the conditions for receiving the relief. ”