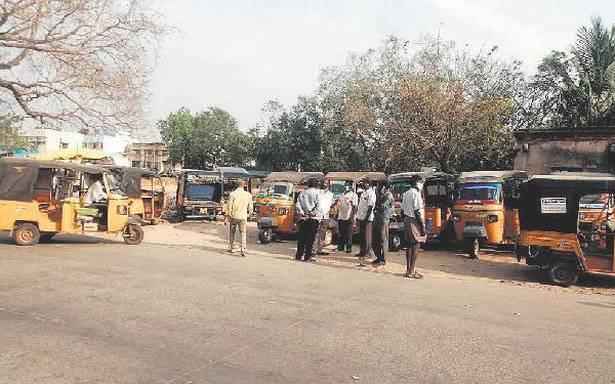 The COVID-19 pandemic has dealt a crippling blow to autorickshaw drivers in Chittoor district, driving almost 20% of them out of the profession. They reportedly went back to their native places elsewhere in Rayalaseema and coastal districts since the lockdown came into effect in March last year.

More than 50,000 autos, including those which ply on sharing basis, used to crisscross the roads of Chittoor district, mostly depending on pilgrim traffic in temple towns of Tirupati, Kanipakam and Srikalahasti. The auto drivers also catered to the passengers on the inter-State routes towards Tamil Nadu.

According to official figures, the Tirupati Municipal Corporation and its surroundings have about 22,500 autorickshaws registered with the traffic police. Since March last year, nearly 3,000 of them have remained confined to sheds. Of the 26,000 and odd drivers, only 20,000 are estimated to be in the business. The auto workers here have migrated from as far as Srikakulam, Vijayawada, Nellore, Kadapa, Rayachoti and several cities and towns of Tamil Nadu.

“We have information that over 2,000 families depending on auto-rickshaws in Tirupati had left for their native places during the last one year,” says Kandarapu Murali, senior leader of the Communist Party of India (Marxist) and a long time functionary of CITU. It is observed that with the perceived second wave of COVID-19 looming, several thousands more will be quitting the profession.

“Due to slack business, we have been naturally charging 30 to 40% extra from the railway station to the various bus stations and to the Alipiri footpath point. Most pilgrims are now unwilling to board crowded autos due to the pandemic impact. A series of hikes in petrol and diesel prices has virtually robbed us of our customers,” laments Narasimha (60), attached to the railway station stand.

In the Chittoor corporation limits, where ‘share autos’ are banned, the plight of the auto drivers is worse. Of the 3,500 registered autos, 30% stopped plying since last year, says a police officer.

The rural side of Chittoor district towards the west predominantly depends on share autos. But now people in villages are going out of their place only when it is unavoidable.

The movement of public from the forested and remote villages in autos has more than halved in Bangarupalem, Palamaner, Baireddipalle, V. Kota and Kuppam, which border with Tamil Nadu and Karnataka.

Adding fuel to fire, the COVID impact has prompted many parents to avoid autos to ferry their children to schools as they preferred to personally drop and pick them up on bikes.