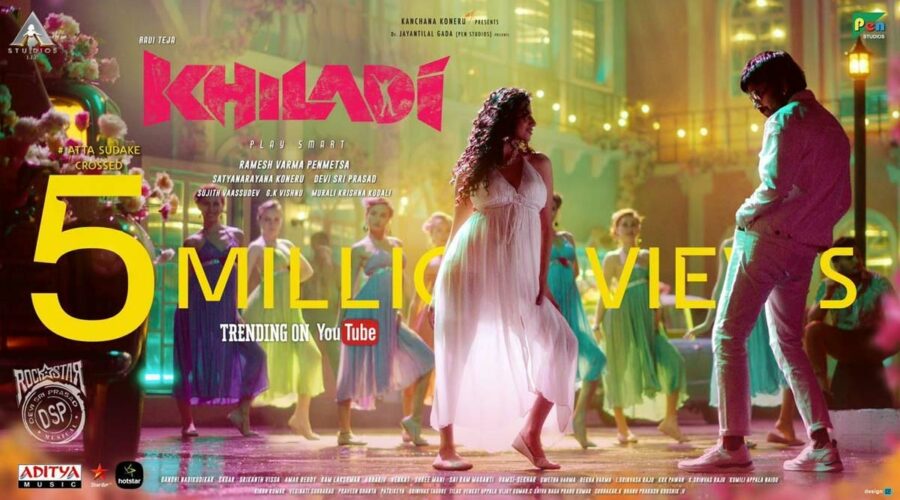 Few days  ago, the makers of upcoming action drama Khiladi released the lyrical video  of the third song Atta Sudake from  Mass Maharaja Ravi Teja starrer. The video of the peppy number featured lead pair Ravi Teja and Meenakshi Chaudhary shaking their legs. The performance by the stars justified the dance beats. Now according to the latest report, Atta Sudake from Khiladi  is unstoppable with 5M+ views  and it is currently trending on Youtube.

The song Atta Sudake is composed by Rockstar Devi Sri Prasad with catchy lyrics by Shree Mani. Devi Sri Prasad and Sameera Bharadwaj have lent their voices to this peppy song, which is  choreographed by Sekhar master.

The video of the grooving track showed the sizzling chemistry between Mass Maharaja and Meenakshi. The video of the party-themed song also featured the  glimpses of BTS from the sets.

The makers  had earlier released two songs – Istam and Khiladi title track. Both songs were hit and are still being watched in large numbers on YouTube. And now Atta Sudake is trending on Youtube.

Helmed by Ramesh Varma, Khiladi is all set to hit the theaters on 11th February, 2022. He will be next seen in Tiger Nageswara Rao, which is touted to be a biopic of a notorious thief of the 1970s.