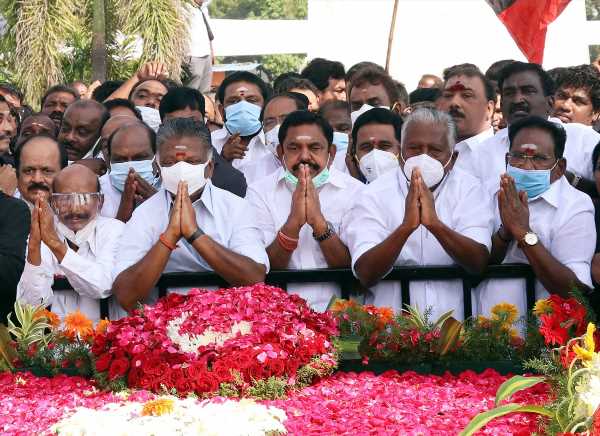 Five years after the death of Jayalalithaa, the 50-year-old party — that Jayalalithaa breathed life into in 1989 — is struggling to find its feet in state politics, reports Shine Jacob.

On March 25, 1989, the history of Tamil Nadu politics was in a sense rewritten when Jayaram Jayalalithaa’s sari was allegedly ‘pulled and torn’ by a Dravida Munnetra Kazhagam minister in the assembly.

Old-timers still remember a weeping Jayalalithaa vowing to return to the assembly as chief minister.

For a charismatic politician like Jayalalithaa, this battle was another set of struggles she had to face after the death of MG Ramachandran in 1987, when the All India Anna Dravida Munnetra Kazhagam was split into two factions — one supporting MGR’s wife Janaki Ramachandran, the other being with Jayalalithaa.

Despite Janaki becoming the CM for a brief period, history saw the Iron Lady of TN first getting control of the party and later becoming one of the strongest CMs in the history of India.

Five years after the death of Jayalalithaa, the 50-year-old party — that Jayalalithaa breathed life into in 1989 — is struggling to find its feet in state politics.

Factionalism between Ottakarathevar Panneerselvam and Edappadi K Palaniswami, the dominance of the national ally Bharatiya Janata Party, the ruling DMK having a strong face in the form of CM Muthuvel Karunanidhi Stalin, ‘community and region-based politics’, corruption charges against former ministers, and lack of a proper ideology are the major challenges the party is facing in the state.

“Both the leaders lack the ability to lead the party to the future by inspiring the people and are nowhere comparable to MGR or Jayalalithaa. Corruption is also affecting the party. In its 50th year, it has no ideological base that can inspire people other than its hatred for DMK,” said Ramu Manivannan, head of the politics and public administration department at the University of Madras.

None of the AIADMK leaders that Business Standard contacted were available for comment.

At present, AIADMK’s former milk and dairy development minister K T Rajenthra Bhalaji is on the run after his name got associated with a job scam.

Vigilance had also raided its former minister P Thangamani, in connection with a disproportionate assets case.

The major factor that is making a difference between the ruling DMK and AIADMK is Stalin. Although criticised by the Opposition as a ‘family party’, Stalin turned out to be a larger-than-life persona within a span of months as the CM — leading from the front during the COVID crisis and floods, fulfilling poll promises, bringing in fresh investments, and even in his fight against casteism (by appointing non-Brahmin priests at temples, his stand on Narikuravar justice).

“The AIADMK even failed to stand for Dravidian identity — take the case of the signing of the farm Bills, National Eligibility-cum-Entrance Test issue. It could have maintained neutrality but  it voted with the Bill,” said Manivannan.

If posters are a big communication tool, the current AIADMK leadership seems to be having no alternative face to Stalin.

Recently, the party organised statewide protest rallies against the ‘anti-people’ attitude by the DMK. However, the posters at all the rallies showed only Jayalalithaa’s face.

Though many believe that V K Sasikala, called Chinnamma, is more popular than OPS and EPS, her strong grip on the party notwithstanding, she has no proven electoral track record.

According to reports, she will not be able to contest for polls till 2027 based on existing guidelines.

She was ousted from the party by the EPS-OPS duo, despite being instrumental in making EPS the CM when she was convicted under the DA case in 2017.

“EPS and OPS are never understood as leaders. They are one among equals and the party is polarised between communities and regions. Both of them see Sasikala as a threat. She has got a say in the party being a senior and has known its inner workings for 35 years. The problem is she never contested any elections and cannot contest for another six years,” said Tharasu Shyam, a senior political analyst.

Yet AIADMK got 33.29 per cent (66 seats) votes in the last assembly elections, only 4 per cent less than the DMK that swept the state by winning 133 seats and 37.7 per cent votes.

The rising tide of the Bharatiya Janata Party, too, is affecting the structure of the party, according to many.

However, the national party’s dream of becoming No. 2 seems unrealistic for now.

“For the BJP to become No. 2 in in TN is a distant dream, although it is trying its best. In order to get that spot, it is destroying AIADMK,” said Shyam.

The failure of Kamal Haasan and Rajinikanth, too, has thrown up a vacuum for the second place in Tamil politics, with analysts stating it ‘is Stalin who is holding the first, second, and third spot’.

For the time being, several party cadres are finding relief in their Chinnamma’s words spoken recently: “I will not let the party fail. This is for sure.”

01/03/2022 India Comments Off on At 50, AIADMK faces senior moment with no saviour in sight
India