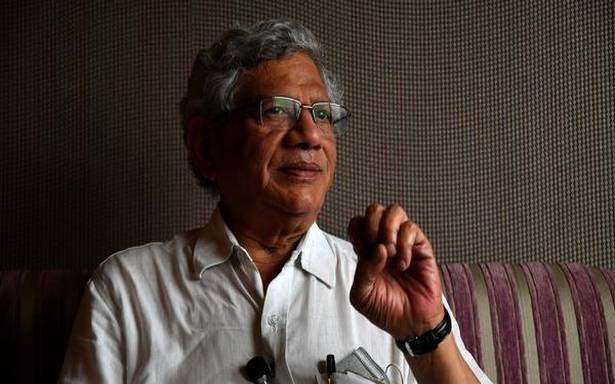 Left’s electoral fortunes on Sunday swung between extreme euphoria of Pinarayi Vijayan’s victory in Kerala where after a gap of nearly 40 years an incumbent government returned, and total annihilation in West Bengal drawing a blank for the first time in independent India.

The Left is drawing solace from the BJP’s defeat in West Bengal. “The BJP suffered a severe setback despite its money power and manipulations in West Bengal. The people of Bengal have very clearly rejected the ideology of communal polarisation,” the CPI (M) Polit Bureau statement said.

People’s urge to defeat the BJP led to a sharp polarisation squeezing out the Sanjukta Morcha, the party said. Explaining this further, CPI (M) general secretary Sitaram Yechury told The Hindu, “In a first past the post system, if there is a polarisation then the third force often gets elbowed out.”

CPI (ML) General Secretary Dipankar Bhattacharya, who was critical of the Left front’s political line in the elections, said that the Left was never a factor in this election. “This election was all about BJP trying to capture Bengal and Bengal trying to stop BJP. Left in fact should celebrate BJP’s defeat. This in many ways is a vindication of the Left’s inclusive legacy in Bengal,” he said.

But this historic low is deeply worrying for many. Even in 2011, when Mamata Banerjee first routed the Left government after its 34-year spell, the Left Front had got nearly 35% of vote share just three percentage points behind the TMC. In ten years time, the combined strength of Left parties together does not cross 2%. Mr Bhattacharya said that the Left has been callous and will need to “re-orient and rebuild” itself.

“Left will have to do a serious review of its political line and assessment of its situation. How did we lose the grip? And how did the BJP gain a firm foothold in West Bengal, needs a serious review,” CPI general secretary D. Raja said.

The CPI (M) meanwhile is staring at the question whether these bipolar results will disrupt its internal balance and Chief Minister Pinarayi Vijayan overshadow the party itself. Just when, at the end of a long and tiring tussle on the question of allying with the Congress between the Kerala and West Bengal units was settled, the question itself became irrelevant.

However, party General Secretary Sitaram Yechury, said only those who are unaware of working of the CPI (M) would pose such a question. “All decisions are taken in our party collectively,” he said.