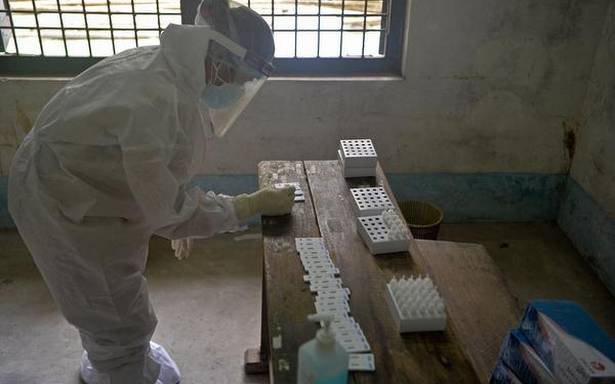 Rise in the number of postal ballots has been another reason for increasing the counting halls from 1,002 to 2,364.

Starting 8 a.m. on Sunday, the counting of votes for the 822 Assembly seats spread across West Bengal, Tamil Nadu, Assam, Kerala and Puducherry will take place at 2,364 counting halls following the COVID-19 protocols, the Election Commission (EC) said on Saturday.

In 2016, the total number of counting halls was 1,002. The over-200% increase is due to the distancing norms being followed by the poll panel to curb the spread of the coronavirus.

Another reason the commission has attributed to the increase in the number of counting halls is the jump in the figure of postal ballots used in the five Assembly polls.

“The commission’s measures to extend the postal ballot facilities to the electors in the categories of senior citizens (those above 80 years), people with disablities and those affected by the coronavirus witnessed an increase of 400% in the number of postal ballots (from 2.97 lakh in 2016 to 13.16 lakh in 2021) in the four States and a Union Territory," it said.

Nearly 95,000 counting officials, including micro-observers, will perform the task of counting.

No candidates or their agents will be allowed inside the counting halls without a negative coronavirus report, according to the latest result-day guidelines issued by the EC.

According to the information received from the State Chief Electoral Officers (CEOs), the contesting candidates have given the details of nearly 1.5 lakh counting agents (including substitutes) in the four States and the UT.

More than 90% of them have already undergone RTPCR or RAT tests. The remaining are being provided with the test facility by the district election officers on Saturday.

Test reports from any authorised laboratory would also be accepted, the EC said.

This is also being followed for the counting of votes in the bypolls held to Lok Sabha and Assembly seats across the country.

Chief Election Commissioner (CEC) Sushil Chandra reviewed the counting arrangements with senior EC officers and the CEOs of the four States and the UT at a virtual meeting on Saturday.

He directed that all laid-down instructions of the EC must be adhered to. He also directed that the counting halls must be fully COVID guidelines compliant.

The CEC complimented the CEOs for a successful completion of polling in the challenging situations of the pandemic.