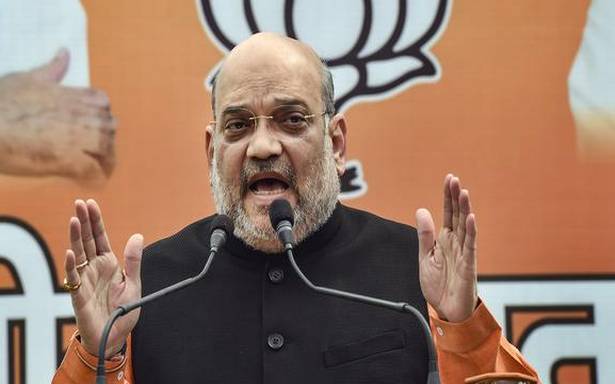 Amit Shah said the peaceful polling and the high voter turnouts are positive signs for the two States and thanked the voters.

Union Home Minister Amit Shah claimed on Sunday that BJP would win more than 26 seats in the first phase of Assembly elections in West Bengal. He said women from West Bengal have voted for the party in large numbers.

Polling took place on 30 Assembly seats in West Bengal that concluded on Saturday.

Mr. Shah also claimed that BJP was winning more than 37 out of 47 Assembly seats in Assam that saw polling in the first phase on Saturday.

“Yesterday first phase of polls in two States were concluded. I want to thank people in both the States that they voted in favour of BJP in huge numbers. 84% polling in West Bengal and 79% polling in Assam shows the huge enthusiasm of voters. The two States were earlier known for poll violence but polling was peaceful this time. No one was killed,” Mr. Shah said at a press conference at his residence in Delhi on Sunday.

“We are winning more than 26 seats out of 30 seats polled yesterday in West   vote share will also increase. In Assam also we will win more than 37 seats. The voting pattern reflects that people want a protest free Assam, development prone Assam. Assam has realised the importance of double engine government,” he said.

He said West Bengal has been afflicted with appeasement politics and unfettered illegal migration. “The funds for development work was usurped by political parties, the kind of mismanagement during COVID and Amphan was seen… .After 27-year communist rule, it was felt that some transformation will come, however nothing changed under Didi [West Bengal Chief Minister Mamata Banerjee] Bengal can develop, without appeasement a government can run, all can get religious freedom,” he said.

Mr. Shah said that before the polls, there was a fear among BJP workers that polling will be disrupted and they will be attacked but the Election Commission of India ensured peaceful elections.

“First time that an election has been conducted without death, bomb or bullet being fired. Women in Bengal have voted in large numbers for BJP. We will cross more than 200 seats. In Assam also we will on more seats than we have now,” he said.

He said no polling agent of Trinamool Congress had complained of mismanagement at polling booths.

When asked about the high-voltage contest at Nandigram between Ms. Banerjee and BJP candidate Suvendu Adhikari, Mr. Shah said, “Nothing special about Nandigram, it is just a seat for us but if Nandigram does it then transformation will come. The maa maati maanush (TMC slogan) promises have been proved hollow,” he said.

“Not everything is to be made public,” Mr. Shah said when asked about his meeting witu Nationalist Congress Party’s (NCP) Sharad Pawar on Saturday in Ahmedabad. The meeting was held at the residence of industrialist Gautam Adani.

He dismissed questions about Ms. Banerjee’s statement that Prime Minister Narendra Modi campaigned for Bengal elections during his official trip in Bangladesh. "Did PM talk about corruption in Bangladesh yesterday, why are you asking what Mamata Banerjee is saying?" Mr. Shah remarked.

Mr. Shah said that the media should raise how the phones of two BJP leaders were tapped in West Bengal and their conversations leaked.

“Till yesterday, Chatradhar Mahto was free, elections concluded yesterday,” he said when asked about the timing of TMC leader Mahto’s arrest by  National Investigation Agency (NIA) on Sunday.

He said the Kerala Government’s move to register a case against Enforcement Directorate officials was a “face saving exercise” as the principal secretary of the State government had been arrested in a gold smuggling case.