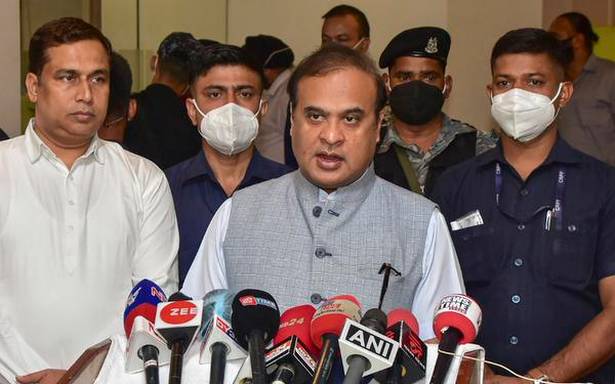 More than a month after the controversial eviction drive in Gorukhuti in Darrang district, the Assam government on Monday began another round, evicting encroachers from a reserve forest in Hojai district’s Lumding.

Organisations such as the All Assam Minority Students’ Union (AAMSU) slammed the “selective” drives.

Local officials aided by about 1,000 security personnel, including four companies of the Central Reserve Police Force, used elephants, excavators and tractors to clear encroachment in the 22,403-hectare Lumding Reserve Forest.

District officials said the eviction, being carried out at the direction of the Gauhati High Court, will continue till Tuesday. The court had on September 30 directed the State government to clear the encroachment in a phased manner.

Officials said there was no resistance from the “illegal settlers” and the drive was peaceful unlike the one in Gorukhuti where two persons, including a minor, died in police firing.

About 1,410 hectares of the forest are under encroachment, officials said. Some 1,500 families, settled there to primarily cultivate ginger and turmeric, had built a school, a church and a mosque.

“Many settlers vacated their houses while others are ready to leave. We are trying to convince a few who are refusing to budge,” Hojai’s Superintendent of Police Barun Purkayastha said.

Some of the settlers had gone to the court claiming they have been living there for several decades.

Chief Minister Himanta Biswa Sarma said a few businessmen had encroached the forest and settled the people from Barpeta and Dhubri districts for commercial farming in a forest.

While the Lumding forest was being cleared, members of the AAMSU staged a sit-in demonstration at Jantar Mantar in New Delhi to protest the eviction drives.

In a memorandum to Prime Minister Narendra Modi, the students’ body said the Assam government, as part of a political agenda, engaged in an “arbitrary, selective and illegal eviction” of genuine Indians without verifying historical reality, thereby forcing these people to live a “beastly nomadic life”.

“A large section of the religious minority community settled on the banks of the Brahmaputra and its tributaries, ushering an era of an agricultural revolution. However, they also face the wrath of the rivers as hundreds of hectares of land get submerged due to devastating floods and erosion leading to frequent migration,” the AAMSU said.

It said the government was duty-bound to provide basic amenities of life and rehabilitate these displaced families.

The Communist Party of India (Marxist–Leninist) [CPI-ML] also criticised the Bharatiya Janata Party (BJP)-led State government for issuing notices to people settled on sandbars in the Dhing area of Nagaon district adjoining Hojai. Claiming that the settlers had moved after being affected by floods, the party said the ongoing eviction drives were aimed at harassing the Muslims.