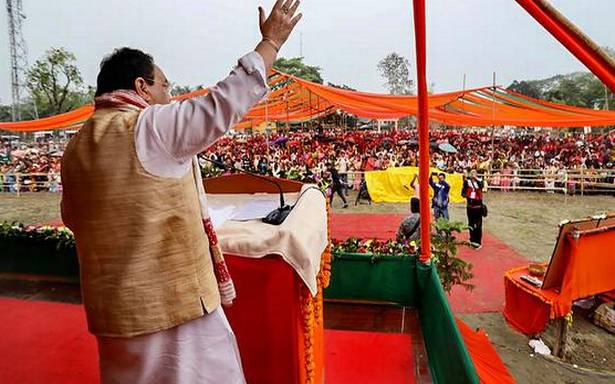 “The Bodo Accord, which brought lasting peace, was signed because of their efforts”

Addressing a rally in western Assam’s Dharmapur, he referred to extremism in the Bodo tribe-inhabited areas to dispute Congress’s role in taming armed movements in the State.

“Modiji and Amit Shahji showed the proper will to end decades of violence in Bodoland. The Bodo Accord, which brought lasting peace, was signed because of their efforts,” Mr. Nadda said.

“Some 2,000 militants have laid down 4,000 firearms in Assam. Besides, surrendered militants were given ₹4 lakh one-time financial grant,” he said.

He claimed Chief Minister Sarbananda Sonowal and Finance Minister Himanta Biswa Sarma had helped tackle Assam’s flood problems and another five years for the BJP and its allies would ensure a flood-free State.

Mr. Nadda also took a swipe at Congress leader Rahul Gandhi for tweeting that there was a difference between jumla and progress.

“Who gave the slogan of Garibi Hatao (Remove poverty)? Did it alleviate poverty? Rahulji, the jumla you mention was started by your own family,” he said, slamming Congress for forming an alliance with Maulana Badruddin Ajmal’s All-India United Democratic Front.

“Whether it is Kerala or Bengal or Assam, Congress is forming alliances with parties based on religion. It is the BJP that is committed to protecting Assam’s identity and we consider that our religion,” Mr. Nadda said.

On Tuesday, the weather played spoilsport for Mr Gandhi. His flight could not land in southern Assam’s Silchar where he was scheduled to address a rally, and later one each in the hill districts of Dima Hasao and Karbi Anglong.

Election for the Assembly seats in these districts are scheduled in the second phase on April 1.