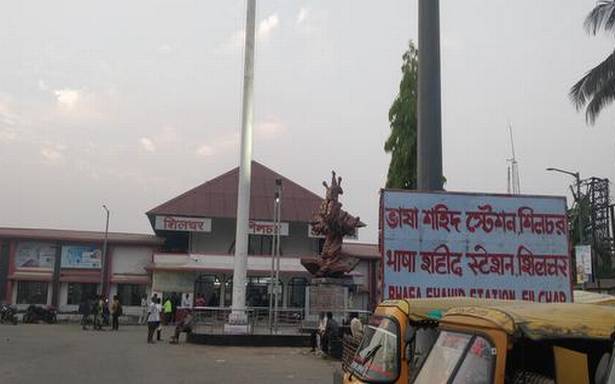 Bengali-dominated Barak valley, with 15 Assembly seats, often gets into political and developmental discourse as an afterthought

The railway station in Silchar, the political hub of the Bengali-dominated Barak valley comprising 15 Assembly seats, is more than a terminal for train travellers. Named Bhasha Shahid Station, it takes locals back to May 1961 when the Assam Police shot and killed 11 people who protested the “imposition” of Assamese through a legislation in October 1960.

The psychological divide between Barak valley and the Assamese-speaking Brahmaputra valley has remained since. Geography too played a part; if not resourceful enough to fly, one has to either drive miles through the hills of Meghalaya or take a train through the equally hilly Dima Hasao district of central Assam to reach Bhasha Shahid Station.

But the Citizenship (Amendment) Act (CAA) appears to have divided the two valleys. While the Brahmaputra valley has been largely against the law, many in Barak valley have supported it.

The CAA seeks to fast-track the citizenship of non-Muslims, who allegedly fled religious persecution in Afghanistan, Bangladesh and Pakistan and took refuge in India till December 31, 2014.

Keen on wresting Barak back from the BJP, which had won eight Hindu-dominated seats in 2016, the Congress appears to have taken a gamble with the “guarantee” of having CAA scrapped if voted to power. The remaining seven seats are Muslim-dominated.

“People are gravitating toward Congress because they have called the BJP’s bluff on CAA, which fools Bengali Hindus because of the conditions that come with it,” the party’s pointsperson in Barak and former MP Sushmita Dev said, adding that the BJP’s avoidance of CAA in Assam while rooting for it in West Bengal revealed its true face.

State BJP chief Ranjeet Kumar Dass said the rules of CAA would be framed after the polls for implementation in the country. But there are few takers in Barak valley.

“CAA will never happen in Assam because the BJP would not like to lose the votes of the Assamese, many of whom are against it. Another factor is Clause 6 of the Assam Accord that guarantees Constitutional safeguards for indigenous communities, and it is unlikely that Bengalis of any religion will be considered indigenous no matter how long they have been living in Assam,” said Kamal Chakraborty of the Unconditional Citizenship Demand Forum.

The Assam Accord of 1985 prescribes deportation of all immigrants or refugees who entered Assam after the midnight of March 24, 1971. The CAA is in conflict with this accord most groups in the Brahmaputra valley stand by.

“CAA came as a corollary to the National Register of Citizens (NRC), which did negate the Brahmaputra valley narrative that there are 1 crore Bangladeshi Hindus. Do you think the 19 lakh excluded from the NRC would have submitted their papers had they not believed they are Indians?” he said.

Basudeb Sharma of the All Assam Bengali Hindu Association admitted that Bengali Hindus harbour resentment because of the BJP’s near-silence on CAA in Assam while being very vocal in West Bengal. “But BJP is the only party that talks about them, so they have no choice but to wait for things to pan out after the polls,” he said.

Most agree the CAA and the Hindutva agenda has polarised Barak valley like never before. “Every action has a reaction. More than one party has turned communal. Where Bengali Hindus and Muslims should have been together on issues of NRC and D (doubtful) voters, they are moving apart. For some, CAA is the dose of reassurance that nothing will happen to them so long they are with a party,” said former MLA Ataur Rahman Mazarbhuiya.

Despite the “confidence”, what could work against the BJP is the side-lining of veterans who helped establish the party in the 1990s and were grounded in the Rashtriya Swayamsevak Sangh. Former Assembly deputy speaker Dilip Kumar Paul, one such snubbed leader, is contesting the Silchar seat as an independent.

“This is not the original BJP; it is a party of imports from the Congress and AGP (Asom Gana Parishad) and people involved in dark deals. You cannot expect them to address the concerns of people in Barak valley, which is a neglected part of Assam,” he told The Hindu.

The Congress and ally All India United Democratic Front, too, would have a friendly fight in one seat, while contesting 10 and four seats individually.

The 15 Assembly seats of Barak Valley are among the 39 going to the polls in the second phase on April 1.