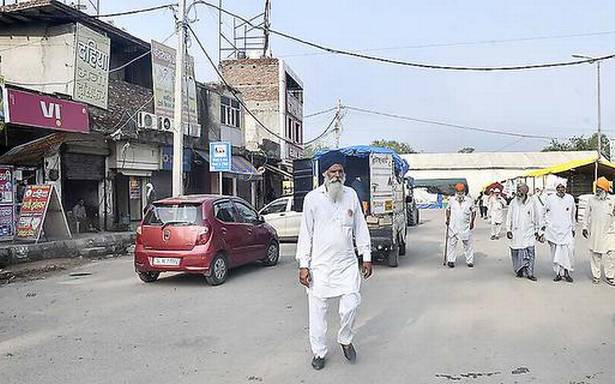 Unable to pay rent or bear other expenses, shopkeepers resorted to firing employees or taking kids out of school

It has been almost eight months since farmers started protests at Delhi’s borders. It is around the same time that the businesses in the area began to take a hit.

Manjeet Dahiya (32) — who runs a mobile shop near the first stage at Singhu border — said he has been running into losses since January. The losses have been mounting, he said, adding: “I pay a rent of ₹5,000, which is difficult to pay now.”

Mr. Dahiya, who lives in Haryana’s Nahri, is also a farmer. He manages farming and shop simultaneously. “My mother, wife and daughter depend on my earnings. Farming helps me earn a little. I understand their [protesters’] concerns but this stir will not yield any solution. We can’t even try talking to them because they won’t understand.”

He said when the protest began, the earnings were good but after the area was restricted for the public and roads were barricaded, “the shopkeepers here started incurring losses”.

Suresh Pandey, who runs a grocery shop, said he had to take two of his three children out of private school because he couldn’t afford the fees.

“My sons used to study in a private school and daughter in a government school. I couldn’t pay the fees, so school authorities stopped teaching them. I had no other option but to get their names struck off the rolls,” he said.

Mr. Pandey pays ₹15,000 per month as rent for the shop. “But I have not been able to pay it for the last four months. I have told the owner that I will pay when I can.He has agreed now. If the owner asks for rent, I will have to shift my shop to a wooden cart. Which other option do I have?” he asked.

He said he is only able to manage food with the earning from the shop and has seven members in his family, including parents, wife and three children.

Vijay, who runs a spare parts shop in Kundli, said he had to fire four employees because he couldn’t afford them anymore. “No one comes here to buy because they get stuck in traffic. There are no earnings. I don’t know how I will survive,” he said.

Farmers have been protesting against the new farm laws since November 26 at Singhu, Tikri and Ghazipur borders.

07/15/2021 India Comments Off on As farmers thronged borders, traders bore the brunt of stir
India