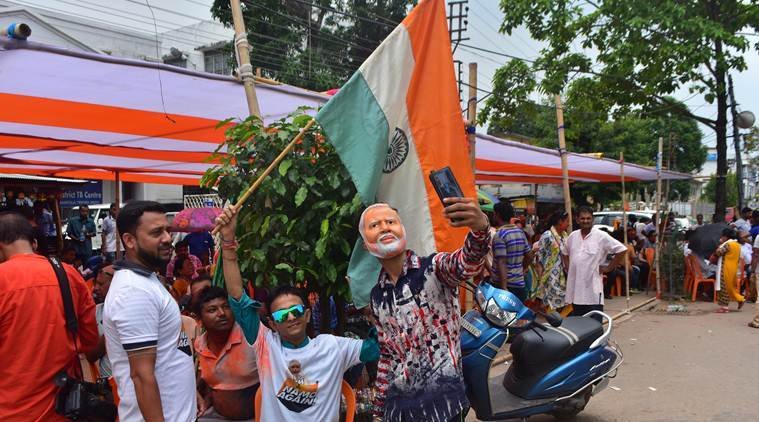 The BJP had never won a Lok Sabha seat in Tripura ever before and had managed a meagre 5.77% vote share in the 2014 elections. This vote share is now a staggering 49.30%. The 2019 Lok Sabha elections — where both the state’s seats were won by the BJP — could have changed Tripura’s political landscape for ever. There are three big takeaways from the results here.

One, the communists, who have ruled the state for over three decades, are now a minority and no more the prime political opposition. Two, the Congress, which emerged as the major challenger ahead of the Parliament polls, lived upto the hype but fell short of numbers and, therefore, expectations. Third, regional tribal political parties have largely become irrelevant.

But how did the Bharatiya Janata Party manage to pull off this spectacular win, that too with debutantes in both seats of the state? The party had never won a Lok Sabha seat in Tripura ever before and had managed a meagre 5.77 per cent vote share in the 2014 elections. This vote share is now a staggering 49.30 per cent.

BJP fielded Pratima Bhowmik and Rebati Tripura as candidates in West Tripura and East Tripura constituencies this year. Pratima, who lost to former Chief Minister Manik Sarkar in the 2018 Assembly elections and several times before that, comes from a family of farmers. In the West Tripura seat, she trounced Congress candidate Subal Bhowmik by a margin of 3,05,689 votes.

Rebati Tripura is a teacher by profession and social worker. His political presence has so far been that of a harmless gentleman. He was up against Pragya Debburman of the Congress party who also hails from Tripura’s Manikya royal family, and sitting MP Jitendra Choudhury. But that did not stop him from leaving the Congress candidate behind by 2,04,290 votes.

“The BJP has made major inroads in NE India including Assam and Manipur. Meanwhile, the Congress had failed to save people from the tyranny of the Left. But then there are other factors responsible as well. BJP, being in power, used the administration in their favour and there were some electoral malpractices like rigging, especially in West Tripura district,” seasoned political observer Sekhar Dutta told indianexpress.com.

Dutta said the saffron surge in East Tripura constituency was partly because the electorate saw Congress candidate Debburman as an outsider while BJP’s Tripura was a grass-root person known for this social service and teaching background. “Tripura Congress chief Pradyot Kishore Debburman would have been a much better candidate,” he said.

Another political analyst, not wishing to be named, said regional parties made themselves irrelevant right after they tied up with BJP, sacrificing their promise of ‘Tipraland’ or separate state for tribals. “These sectarian regional appeals don’t find favour among the tribal electorate anymore.”

BJP general secretary Nabendu Bhattacharjee attributes his party’s rise to the Narendra Modi wave and rising consciousness among people. “Times have changed. Royal factors don’t work anymore, neither does the communist utopia. NDA government performed well under Prime Minister Narendra Modi. So, we got a second chance,” he said.

Meanwhile, while BJP’s tribal ally the Indigenous Peoples Front of Tripura (IPFT) secured just a 4.16 per cent vote share, the Congress has sprung back with a 25.34 per cent share. In last year’s Assembly elections they had been reduced to just 1.8 per cent vote share. Even in the 2014 Lok Sabha elections its share was just 15.38 per cent.

“The BJP has gained ground everywhere in the country where they could polarise people. Tripura was no exception,” Tripura Congress president Pradyot Kishore Debburman said.

CPI (M) candidate for West Tripura constituency Shankar Prasad Dutta claimed his election agents were tortured inside counting halls on Thursday despite the police presence and this forced him to withdraw all his agents amid counting process. Senior party leaders have said they are meeting to decide future course of action for the Gram Panchayat elections which are only a month away.

05/24/2019 India Comments Off on As BJP rises in Tripura, Congress gets some new life and the Left is left for dead
India