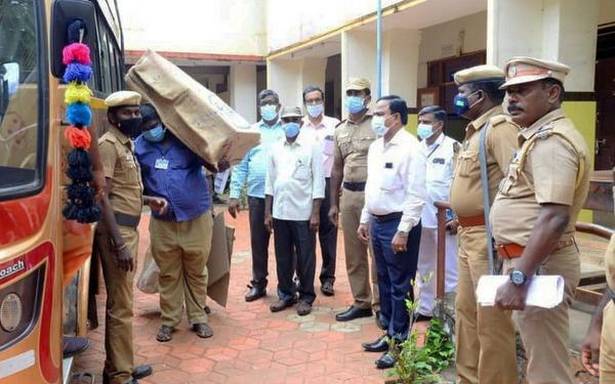 After the incident-free first phase of polling conducted on last Wednesday to elect local body representatives for 1,113 positions in rural civic bodies in five unions of the district, all arrangements have been put in place for conducting the second phase election on Saturday.

Polling for electing representatives for 2,069 vacancies in the rural civic bodies in nine unions in the district is to be held in two phases, the first phase was completed successfully on Wednesday last for electing the representatives to 1,113 positions including village panchayat ward members, village panchayat presidents, panchayat union councillors and district panchayat union councillors in Ambasamudram, Paappaakudi, Cheranmahadevi, Palayamkottai and Maanur panchayat unions. The first phase recorded a voter turnout of 70.36 percentage.

In the second phase of polling to be held on Saturday, the 3,25,826 electorate including 1,60,722 men, 1,65,091 women and 13 other voters will cast their votes to elect their representatives from 2,516 candidates in the fray. Since 151 polling stations are identified as ‘sensitive’, additional police force will be in place besides deploying micro observers in these polling stations.

After the third phase of training given on Friday, all 4,511 polling personnel were asked to reach their polling booths before 6 p.m. on the same day so as to make all the arrangements for hassle-free polling from Saturday 7 a.m.

Even as 2,500 policemen have been deployed as part of the poll-related security arrangements, five flying squads will be on the move to curb poll code violations.

In Tenkasi district, 2,742 candidates are in the fray in the second phase polling for 819 positions in the rural local bodies. As 4,630 polling personnel are to be deployed, they were moved to the respective polling stations chosen randomly with the polling materials on Friday.

Since District Collector and District Election Officer S. Gopala Sundararaj sought permission from the State Election Commission for conducting re-poll in this booth, polling will be conducted again on Saturday for ward 3 of Sivasailam panchayat union.