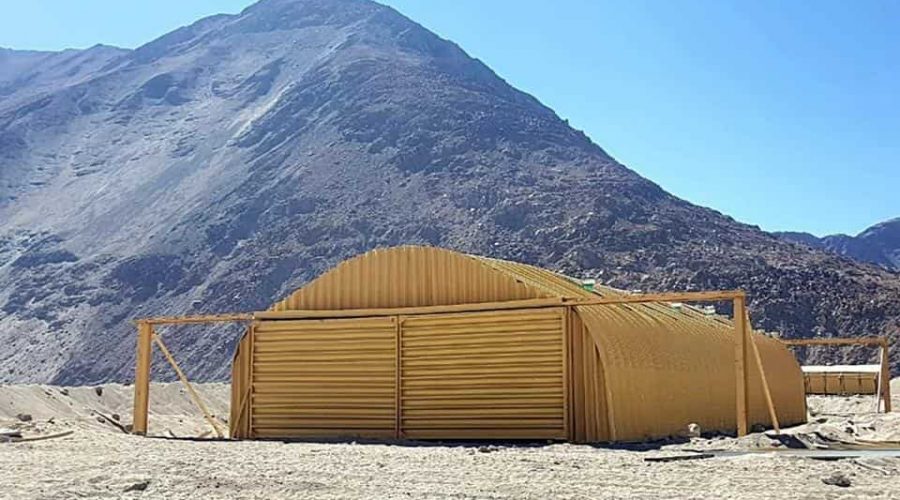 With the temperature set to dip substantially in the Ladakh sector in the coming months, and no solution to the border row with China in sight, the Indian Army has completed the setting up of modern habitat for thousands of soldiers deployed in forward areas to deal with any misadventure by the People’s Liberation Army (PLA), officials familiar with developments said on Wednesday.

Temperatures in some pockets where the Indian Army is holding posts can dip to minus-40 degrees Celsius, with remote high-altitude areas also likely to receive up to 40 feet of snow during peak winter. “Apart from smart camps with integrated facilities, which have been built over the years, additional state-of-the-art habitat with arrangements for electricity, water, heating facilities, health and hygiene, has been created to accommodate front-line troops,” said one of the officials cited above, asking not to be named.

Fresh images from Ladakh on Wednesday provided glimpses of the infrastructure the army has created to support its forward deployed troops at a time when talks to resolve the border situation remain deadlocked and both armies are prepared for a long haul in the Ladakh theatre.

“Troops on the front-line have been accommodated in heated tents… Adequate civil infrastructure has also been identified to cater for any emergency,” said a second official.

At the Siachen base camp and lower heights of the glacier, soldiers live in habitats similar to the ones that have come up in the Ladakh sector, with arrangements for electricity, water and heating, the officials said.

Troops deployed at extreme altitudes in Siachen live in heated tents (just like front-line troops along the contested Line of Actual Control) — almost 80 per cent of the posts on the glacier are located above 16,000 feet, with Bana post towering above the rest at 21,753 feet.

“Frontline troops have to live in tents. You can’t have prefab units on the border. These units are basically to house reserve troops,” the officials said. The Indian soldiers are holding positions at heights of almost 20,000 feet in the Finger Area on the northern bank of Pangong Tso.

India has made vigorous attempts to support its high-altitude deployments in the sector, including the supply of specialised winter clothing from the US.

The country has imported more than 15,000 sets of extended cold weather clothing system (ECWCS) from the US, with the emergency supply made by activating the Logistics Exchange Memorandum of Association (Lemoa). India signed Lemoa, the first of the three foundational agreements proposed by Washington to deepen bilateral military cooperation, with the US in August 2016.

In a statement made in the Lok Sabha in September, defence minister Rajnath Singh said the morale and motivation of Indian soldiers was very high and they were being provisioned with suitable clothing, habitat and the required defence wherewithal.

The Indian Army and PLA have held eight rounds of talks to reduce friction along the contested Line of Actual Control (LAC) without any breakthrough. At the last round of talks on November 6, the two sides said they would ensure that their front-line soldiers “exercise restraint and avoid misunderstanding and miscalculation” along the LAC. They also agreed to hold the ninth round of talks between corps commander-ranked officers soon “but no date has been fixed for that dialogue yet,” the officials said.

India is pushing for comprehensive disengagement at all flashpoints and restoration of status quo ante of early April during the talks.