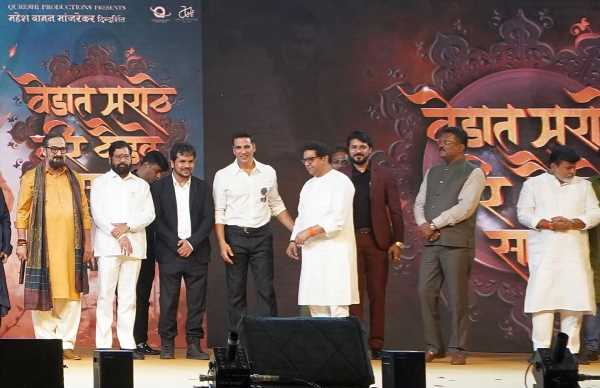 ‘Rajsaheb and I are trying to fill the backlog of the last ten years.’ 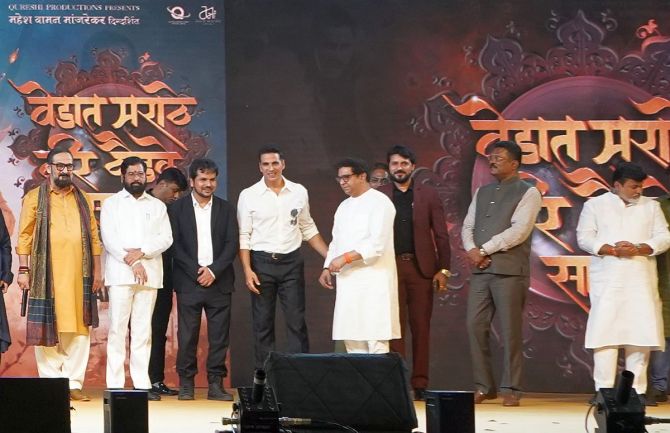 Did Maharashtra Chief Minister Eknath Shinde drop one of the broadest hints from a public forum about a poll alliance between the Balasahebanchi Shiv Sena he heads and Raj Thackeray’s Maharashtra Navnirman Sena?

Speaking at the launch of the Marathi film Veer Daudale Saat — Akshay Kumar’s Marathi film debut as Chhatrapati Shivaji Maharaj — Shinde said and Raj Thackeray have plans to fill the backlog of the last ten years.

“Raj saheb and I have been attending some functions together. We are trying to fill the backlog of the last ten years and we will fill it for sure,” Shinde said after breaking a coconut for the muhurat of Mahesh Waman Manjrekar’s Marathi film Veer Daudale Saat, which is slated for a Diwali 2023 release, a year before Maharashtra heads for assembly polls in 2024.

Thackeray and Shinde, both dressed in white — the MNS chief in a white kurta and pants and Shinde in his trademark white shirt and trousers — shared much bonhomie as Thackeray ushered the chief minister on stage by patting him on the back in a friendly manner.

Referring to the history created by seven brave fighters (Veer Daudale Saat) of Shivaji’s army in the 17th century, Shinde said, “Only people who are committed to a cause make history. Raj saheb aamhi dekhil daud lagavli gelya sadhe teen mahinyat (Raj saheb, we too ran like mad with only one commitment (to establish a government concomitant with Bal Thackeray’s idea of Hindutva) in the last three-and-a-half months.”

“We don’t know we started from where and reached where, but people (of Maharashtra) know that. We fulfilled what the people of Maharashtra had desired for (a government formed by natural allies, the BJP and Shinde’s Balsahebanchi Shiv Sena). And we are getting good support of the people,” Shinde added.

Raj Thackeray, however, dismissed the theory, when this correspondent caught up with him as he left the stage immediately after the coconut breaking ceremony.

Given the bonhomie and stage sharing between the two leaders, responding to a query from Rediff.com about a possible political alliance between the MNS and BSS for various municipal polls slated in Maharashtra beginning this year or early next year, Thackeray said, “tyacha kaay sambandh aahe (there is no connection between sharing a bonhomie and forming a political alliance)”, before he drove off.

Industries Minister Uday Samant, a close aide of Shinde, neither denied nor accepted that there could be a political alliance between the MNS and BSS.

“It is for the chief minister to decide,” Samant first said when asked about it.

“Didn’t you hear what the chief minister had to say? He said he will fill in the backlog of the last ten years between them (Thackeray and Shinde),” Samant added.

Both Shinde and Thackeray broke off their ties with the Shiv Sena. While Thackeray parted ways with Shiv Sena in 2006 and formed the MNS, Shinde broke up Uddhav Thackeray’s party when he took away 39 Shiv Sena MLAs in a midnight coup and drove them to Surat and later flew to Guwahati in June.