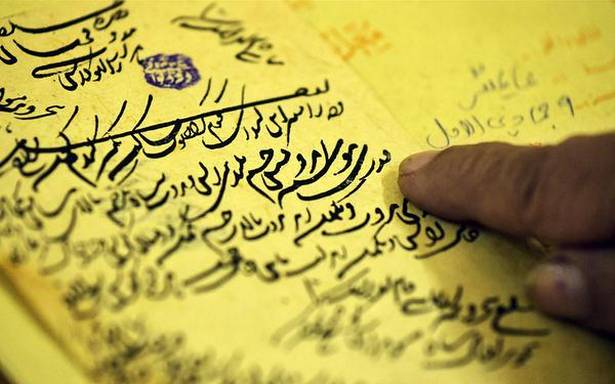 The Telangana State Archives and Research Institute, which has a collection of over 43 million documents/historical records dating back to 1406 AD, has embarked upon an ambitious project aimed at digitisation of all records.

In addition to digitisation of records to preserve them for posterity, the Archives has taken up conservation of the old records which are getting damaged due to passage of time. The institute has urged the Government to immediately sanction ₹ 5.4 crore, a major of chunk of which would be spent on digitisation.

The Director General of State Archives, in a letter addressed to the government, recalled that the institute has collection of records of Bahmani, Qutb Shahi, Adil Shahi, Mughal as well as large chunk of the Asaf Jahi rulers dating from 1724 to 1950, predominantly in Persian and Urdu languages, in addition to rare manuscripts. However, services of the archives was adversely affected by the absence of digitisation of the documents in that it was taking a huge amount of time in searching the required records from the huge stacks preserved.

Moreover, given the age of these manuscripts, the documents were turning brittle and deteriorating. “If timely attention is not given, these precious records of Telangana’s history will vanish in due course of time,” the letter said.

Accordingly, the institution has sought ₹ 2.4 crore for digitisation of the records through creation of meta data files while another ₹ 10 lakh would be needed for upgrading the digital library and website of the archives. This would be in addition to ₹ 20 lakh for the herbal treatment, lamination and other processes for preserving the records.

Works are also proposed on the storage component with the institution proposing at least two rows of compacting systems estimated at ₹ 1 crore and another ₹ 50 lakh for air-conditioning facilities in the stack area.

The amount has been sought as immediate assistance to improve facilities on the existing premises, but senior officials said efforts are under way to secure more funds for construction of a new building in place of the existing one constructed in 1964 so that it can become a centre of excellence in the State for those studying Telangana history.