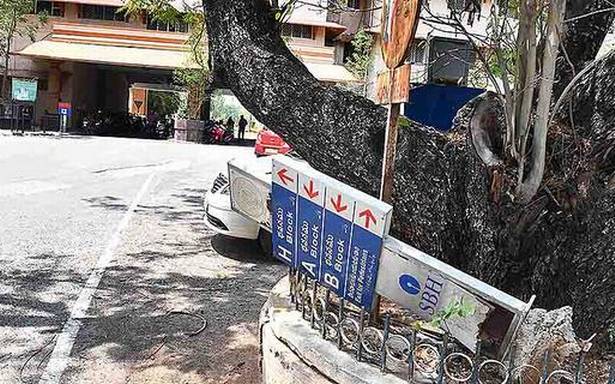 The State government has decided to ask Andhra Pradesh government its preference regarding the two buildings that would be allotted to it.

The development follow Governor E.S.L. Narasimhan’s instructions directing the neighbouring State to handover government buildings and bungalows in Hyderabad that are in its custody. The Governor had instructed the Telangana government to set apart two buildings one for the Police Department and another for all other departments for the exclusive use by AP government.

The State government had accordingly decided to address a letter to the AP Chief Secretary seeking clarity on the buildings that the neighbouring State would prefer to take over. Senior officials, however, said the AP government was unlikely to take possession of the two buildings as new Chief Minister Y.S. Jagan Mohan Reddy was unwilling to have offices functioning from Hyderabad even though it would continue as common capital for five more years. “There are indications that they will not seek any accommodation here,” a senior official told The Hindu.

With the positive response from the neighbouring State, officials have decided to request their counterparts in AP to complete the procedures expeditiously and hand over the buildings. The AP government has been handed over four blocks in the Secretariat as well as office space in other government complexes like the Parishram Bhavan, Gagan Vihar Complex and other buildings as part of the AP Reorganisation Act, 2014 in 58:42 ratio. A major chunk of these office space is lying vacant and under lock and key for more than three years ever since the then Chief Minister N. Chandrababu Naidu shifted from here in 2016.

The process of taking over the possession of these buildings is likely to take a few days as the officials had to follow certain procedures. The chief secretaries of the two States should give their consent for the process following which officials from the departments concerned of AP would handover the keys to their Telangana counterparts. “Since a major chunk of the material, including the documents, computer systems and other items have already been shifted to Amaravati, the AP officials will conduct “panchnama” and handover the keys to us,” the official said.