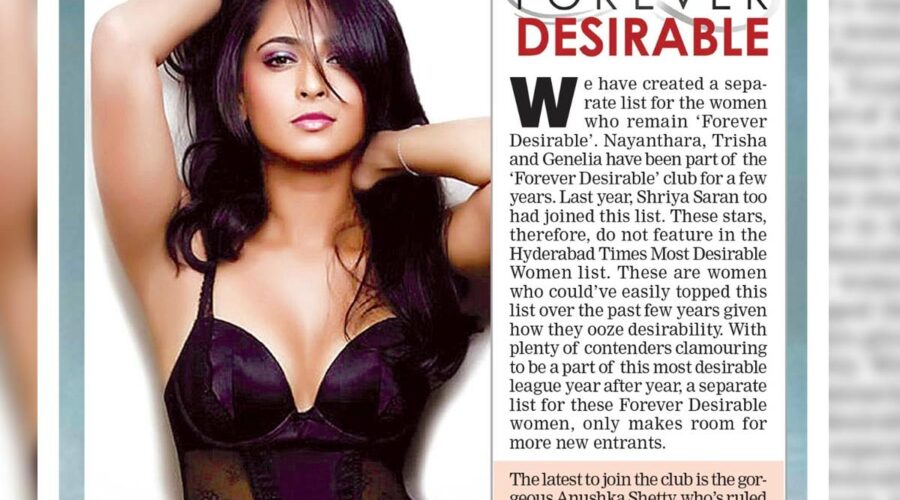 Anushka Shetty is the only leading lady of Telugu film industry who can kick ass like a hero, draw crowds to the theatre and carry a big budget film on her shoulders. It’s no surprise then that Anushka Shetty is crowned Forever Desirable woman 2020. The votes were received online and decided the winners.

Nishabdham fame Anushka Shetty has achieved the rare feat as she has grabbed the title Forever Desirable woman 2020. She is the latest to join the elite list of Hyderabad Times ‘Forever Desirable’. Since the big announcement, innumerable fans and followers of Anushak Shetty have been sending wishes and congratulatory messages to the star.

Another section of social media users has been trending the hashtags #Anushka #Sweety #Tollywood #TollywoodActress #HydTimesMostDesirableWomen2020 #ForeverDesirableAnushkashetty on social media to celebrate the big win of their beloved Anushka.

Anushka Shetty is known for acting in  female-centric films like Vedam, Bhaagamathie, and Size Zero  which were much-loved by the audience.  Her character Jejamma, in her film Arundhati  was one of the most unique characters in her career. Arundhati was not just a box office money-spinner, but it  was the highest-grossing film of that year. After impressing her fans with Bhaagamathie, Anushka  shetty  came up with Nishabdham, which was released on OTT platform.