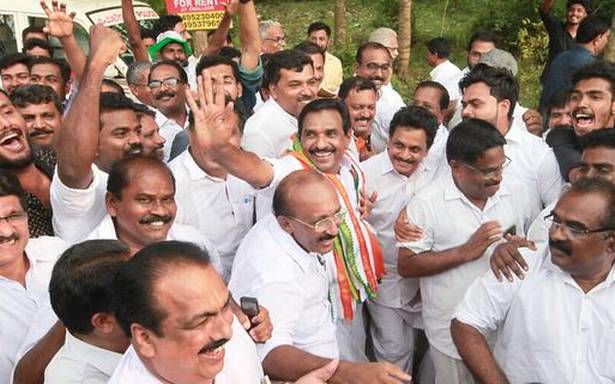 The BJP hopes of winning the Pathanamthitta Lok Sabha constituency riding on the Sabarimala wave were thwarted by the Congress, with its candidate and sitting MP, Anto Antony, garnering a decisive lead of 44,613 votes. The Left Democratic Front’s (LDF) Veena George, sitting MLA, is in the second spot.

The BJP had fielded K. Surendran, a popular figure in the stir against the court verdict on Sabarimala. However, he could not lead in any of the Assembly segments in the constituency.

The BJP had high hopes on Pathanamthitta and the defeat is sure to kick up much debate even inside the party. The announcement of the candidate at the 11th hour and the opposition of certain senior party leaders to Mr. Surendran’s candidature had invited much criticism. Mr. Surendran’s name was not included even on the list given by the party district committee. Finally, he was fielded following the intervention of the RSS State leadership and the RSS had taken a lead role in his poll campaign too.

The poll outcome suggests that believers cutting across party lines reposed faith on the UDF candidate so as to ensure a defeat for the LDF in Pathanamthitta. Though most of the minority votes have gone in favour of the Congress, Ms. George of the CPI(M) too got a fairly good number of votes from her community, which helped her to remain in the second position.

The BJP’s pro-Hindu campaign, highlighting the Sabarimala issue, and the public resentment against the LDF government’s ‘anti-believer stance’ have helped the UDF garner silent public trust in a big way.

“This is yet another victory of the people in their fight against autocracy and injustice and a defeat of atheists,” said Mr. Antony.

Ms. George was not available for comments.