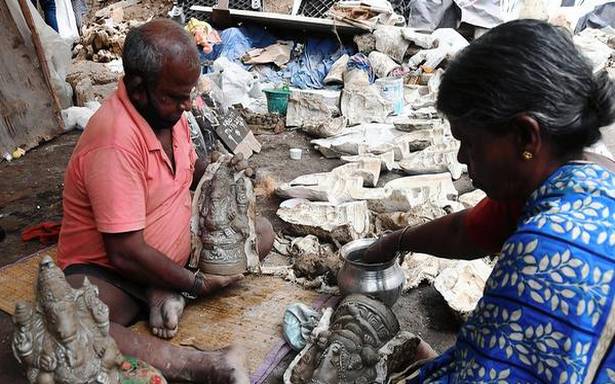 Owing to the pandemic, many left with huge unsold stock carried forward from 2020

For the second consecutive year, artisans of Kosapet are struggling to sell idols for the Vinayaka Chaturthi festival. Many are left with a huge unsold stock carried forward from 2020. The artisans say the order books are lean, and business is likely to be down 50% this year.

“Last year, we made over 5,000 idols and sold only half of them. The remaining pieces are here,” K. Kumar says, pointing to idols wrapped in old papers and kept in shelves. “We are clearing this stock first, and we are making some new idols too, depending on the orders.”

Mr. Kumar, who has been in this trade for the past 34 years, says the sales were low for Krishna Jayanthi too. For the last one year, many artisans have been struggling to repay bank loans, which they had taken in 2019.

Many have pledged gold jewels with local pawnbrokers, while the others have borrowed money at a huge interest, he says.

Until last month, the artisans were optimistic. But Chief Minister M.K. Stalin’s announcement that installation of Vinayaka idols at public places would be banned to prevent the spread of COVID-19 has dampened their spirits. “After this announcement, retailers who had placed orders with us are asking us to reduce the number of pieces. And since many of them have done business with us for decades, we oblige,” says one of the artisans.

Raw material rates have zoomed, adding to their trouble. For instance, the cost of clay (per vehicle), which stood at ₹4,500 last year, is now ₹7,000. The artisans source clay from Periyapalayam, 40 km north of Chennai. The cost of paint, used for colouring the idols, has increased by ₹20-₹30 a litre. Finding labour has become a challenge. In the last 10 years, many families at Kosapet have started quitting the trade, and artisans now depend on workers who have little experience but charge more.

S. Manikandan, another old-timer, has cut down on production. “Last year, I made idols. But this year, I’m being cautious and doing only the moulding work,” he says. The pandemic has almost killed this industry. “Earlier consignments went to the neighbouring States and districts. But now we are selling in and around Chennai only.”

D. Vasu, a retailer from the Ayanavaram market, was at Kosapet to pick up stocks ahead of the festival, which falls on September 10. He has slashed his order size this year.

“I have been coming here for over 25 years. But I’m picking up only 150 idols this time [as against 300-500 pieces earlier],” he says. “Unsold stocks get cleared during navaratri but even navaratri has become a low-key event because of the pandemic.”

This year, artisans have focused on smaller idols priced at ₹50-₹100 (wholesale price). With consumers tightening their belt, artisans do not want to experiment with bigger idols.

A 70-year-old artisan is busy putting the finishing touches on tiny idols of 4-5 inches. “A trend we noticed last year was many people were picking up smaller idols, which they can immerse in water at home and in their gardens. So I’m making 200 such pieces for this season,” she says.

The few artisans who remain are worried that the hub could become a thing of the past in another 3-5 years.