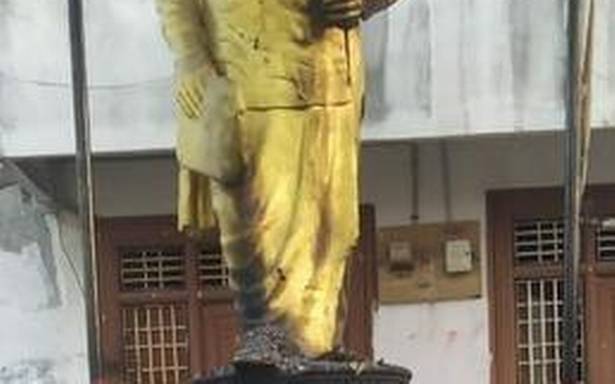 Miscreants sent fire to a cloth that was covering the statue around 3 a.m. on Friday morning, police said

Unidentified persons set fire to a statue of former Chief Minister C.N. Annadurai at Madhavacheri near Kallakurichi in the early hours of Friday, sparking off tension in the area.

According to a police officer, the statue was covered with cloth as part of the implementation of the Model Code of Conduct.

Miscreants had set fire to the cloth on the statue at around 3 a.m. A portion of the statue was partially burnt. Local residents spotted the flames and alerted the Kallakurichi police. The police officer said the statue was cleaned and new cloth was placed on it. Police pickets have been posted in the area to prevent any untoward incident.

Police said that they were examining the CCTV footage of shops and business establishments around the area.