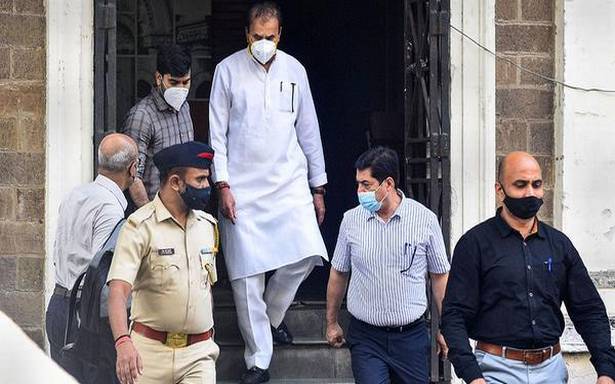 Anil Deshmukh is currently in the ED’s custody, where his interrogation in connection with the money laundering case is on

Former Maharashtra Home Minister Anil Deshmukh, arrested by the Enforcement Directorate in a money laundering case, was taken to the state-run J J Hospital here on Thursday for a medical checkup, an official said.

His all vital parameters are stable, the official said.

Mr. Deshmukh is currently in the ED’s custody, where his interrogation in connection with the money laundering case is on.

The NCP leader was brought out of the ED’s office around 12 noon and taken to the hospital in south Mumbai, the official said.

His routine check up was conducted at the hospital between 12.30 pm and 1.30 pm following which he taken back to the ED’s office, the official added.

Mr. Deshmukh (71) was arrested by the ED late Monday night after being questioned for over 12 hours in connection with the money laundering case.

The former Minister had skipped multiple summonses issued by the ED in the case, but after the Bombay High Court last week refused to quash them, he appeared before the agency on Monday.

On Tuesday, a special holiday court remanded him in the ED’s custody till November 6.

The ED had told the court that Mr. Deshmukh was the "prime beneficiary" of proceeds of crime and directly involved in the offence of money laundering.

The central agency, in its remand note, said the NCP leader emerged as an "important cog in the wheels" in the case, in which there has been an allegation of collection of ₹100 crore, and maintained the involvement of foreign angle cannot be ruled out.

The ED had told the court that Mr. Deshmukh’s custodial interrogation was the need of the hour in the interest of the ongoing investigation, and that the entire money trail requires to be established in order to bring the guilty to book.

The agency had initiated a probe against Mr. Deshmukh and his associates after the CBI filed its FIR against the NCP leader on April 21 this year on charges of corruption and misuse of official position.

Mr. Deshmukh had refuted these allegations earlier and said the agency’s whole case was based on malicious statements made by a tainted cop (Sachin Waze).

The case against Mr. Deshmukh and others was made out after the CBI booked him in a corruption case related to allegations of at least ₹100 crore bribery made by ex-Mumbai Police commissioner Param Bir Singh.

The agency last month submitted its prosecution complaint (equivalent to a charge sheet) against Palande and Shinde before a special court.