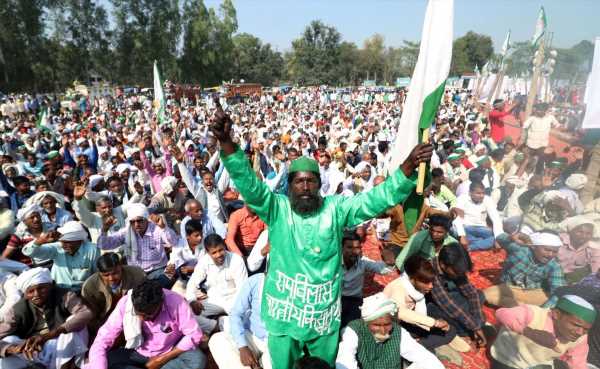 Though a number of Jat leaders and farmers said they would vote against the BJP in the upcoming panchayat election, slated for April, they remained non-committal on supporting opposition parties in the assembly polls next year, reports Nitin Kumar.

The Bharatiya Janata Party is on the backfoot in western Uttar Pradesh: The Jats, among the dominant communities of the region, are up in the arms against the party over the three farm laws and khaps are boycotting its leaders.

The community, along with the Muslims, appears set to vote against the BJP to teach its leaders a lesson — this is what opposition parties, which have suffered a string of electoral routs over the past seven years, are claiming.

The Congress’ Priyanka Gandhi Vadra and the Rashtriya Lok Dal’s Jayant Choudhary have been witnessing huge gatherings at the mahapanchayats being addressed by them.

They hope the crowds will translate into votes. But the proof of the pudding is in the eating.

“We will not vote with them (Muslims) and we will not go to them,” said Yograj Singh Lohar, a farmer attending Jayant Chaudhary’s rally in Bhaisa (Mawana).

This view echoed among the Jats, who attended this mahapanchyat and also among those who have been regularly participating in such protests over the past 100 days.

For many, the wounds of the 2013 Muzaffarnagar riots are still fresh.

Virasat Khan, a 60-year-old farmer who was at the rally, said even the Muslims don’t want to side with the Jats, but ‘(Prime Minister Narendra) Modi has to be defeated’.

Though a number of Jat leaders and farmers said they would vote against the BJP in the upcoming panchayat election, slated for April, they remained non-committal on supporting opposition parties in the assembly polls next year.

All they want is that the Centre give in on the issue of farm laws or present them with a proposal that is acceptable to them.

“We have nothing against the government, but it should listen to farmers and take back these laws,” said Tejpal Singh Lattian, a farmer who cultivates 40 bigha at a village in Muzaffarnagar.

Dharminder Singh, a farmer from Salah Kheri village in the district, demands the government increase the sugarcane support price, pay dues in time, and abolish the farm laws.

Asked who he would vote in the assembly polls, he said the RLD, but he quickly amended his answer, with a wry smile, in favour of the BJP, provided the farm protests came to an end.

Experts, too, are of a similar view.

They said despite anger against the BJP, opposition parties would manage to win only a handful of seats.

Mirza Asmer Beg, professor of political science at Aligarh Muslim University and Lokniti state coordinator (UP West), said the RLD and the Congress were no force to reckon with.

“Neither party has cadre on the ground … the RLD may get two-three seats, given former PM Charan Singh’s legacy, but there is no hope for the Congress.”

Asked about the Jats and the Muslims coming together to defeat the BJP, Beg dubbed such claims ‘wishful thinking’.

“These bonds (Jat-Muslim tie-up) are too weak to weather the BJP’s communal tsunami.”

Even a Congress leader in western Uttar Pradesh, requesting anonymity, said: “The Congress will not be able to find good candidates for even half the seats in the Assembly polls next year.”

The challenge for the BJP is more immediate.

It may suffer a setback in the region in the panchayat polls. With no solution in the sight currently, farmer protests can affect the outcome for the BJP.

It is not that the BJP is biding its time to woo the angry Jats.

Union minister Sanjeev Balyan, MP from Muzaffarnagar and prominent Jat leader in the BJP, is already tasked with meeting farmer leaders and others and dispelling claims that the new farm laws are anti-farmer.

Asked about khaps boycotting BJP leaders, Balyan said: “I am in double role — a khap member and BJP minister. I stand with the government over farm laws.”

He has been holding meetings with farmers in the region.

On the other hand, Manju Balyan, wife of Balyan khap leader Naresh Tikait, who is also president of the Bharatiya Kisan Union, the outfit spearheading the protests, criticised the BJP’s move to hold panchayats supporting the farm laws.

“He (Sanjeev Balyan) should avoid going to villages at this time,” she said.

There’s a reason for this warning: The minister may face the farmers’ ire.

Four people were injured during a recent clash at Shauram, the base of the Sarv Khap Panchayat — a symbol of Jat unity, where he had gone to pay homage to a deceased local, defying a boycott call.

Yogesh Balyan, a resident of Shauram, said: “Bhai ki tarha aave, BJP neta ban ke na (he should visit us as a brother, not a BJP leader).”

But Sanjeev Balyan is confident that the anger will subside by the time the state goes to the polls.

“Naraazgi hai, par hum mana lenge (farmers are angry, but we will placate them),” he said, stressing the agitation is being run on emotions rather than facts.