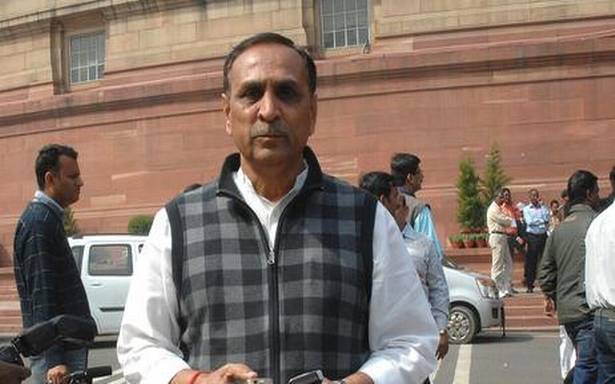 Gujarat CM is the fifth State head to be changed in 2021 by the saffron party.

BJP on Saturday declared the removal of Gujarat Chief Minister Vijay Rupani, making him the fifth head of a BJP-ruled State to lose his job this year.

The year began with Uttarakhand Chief Minister Trivendra Singh Rawat being replaced by Tirath Singh Rawat, who was himself replaced by Pushkar Dhami in four months. In Assam, Sarbanand Sonowal was replaced by Himanta Biswa Sarma; B.S. Yeddyurappa in Karnataka was replaced by Basavaraj Bommai. There is no telling whether this will be the last of such replacements for the year; we have, of course, three months to go.

What it does is raise questions on the prolific nature of the change and the message being sent out by the BJP high command by such dismissals of chief ministers who had been ushered in with much pomp and style. While each State has its own story of local politics which become immediate reasons for the removal, there are also meta narratives to this trend.

The one that springs first to the mind is the fact that none of these chief ministers who were replaced departed with any drama (except a bit by B.S. Yeddyurappa, but in the end, he too went quietly). This points to the fact that the BJP is now an incontrovertibly high command-run party, where the national leadership can take on and does take on regional satraps.

It also points to the fact, however, that while Prime Minister Narendra Modi remains popular and has managed big majorities for himself in the national elections, this has not translated for the party when it comes to Assembly polls, especially since 2018. The party managed to do well in Karnataka in May 2018, but not quite enough to form the government without a massive poaching operation on Opposition MLAs; it then lost the three polls in Madhya Pradesh, Rajasthan, and Chhattisgarh, followed by Jharkhand in 2019, and only managed to form the government in Haryana in a coalition with the Dushyant Chautala-led Jannayak Janata Party (JJP).

In Maharashtra, the alliance between the BJP and Shiv Sena got enough seats to form the government but fell through on account of the party’s ally walking out of the partnership. In Bihar, the BJP did well, but is in a coalition. Only Assam is a holdout in a series of losses in State Assembly polls.

The changes effected by the BJP at chief ministerial levels in certain States are, therefore, a reflection of the party leadership’s assessment of the political ground realities, that faces at the State level need to be accountable for polls, and that the party cannot, again and again deploy its strongest face, that of Mr. Modi at all times, in all elections. Also, the BJP’s image as the party of governance, which it has been assiduously cultivating for years, is under severe threat following the second wave of COVID-19.

However, in certain States, like Uttar Pradesh, the decision to replace the chief minister was not taken. In other States, there was a change, especially after the massive Union Cabinet rejig.

All campaigns are stories, with a narrative, a hero and a challenge to be overcome, but State polls are about that State level face and his/her story. Within the high command heavy organisational structure that the BJP has become, this reality is gaining ground albeit in its own way. The change is still being effected from the top, but with the hope that it changes the recent trend of Assembly losses.