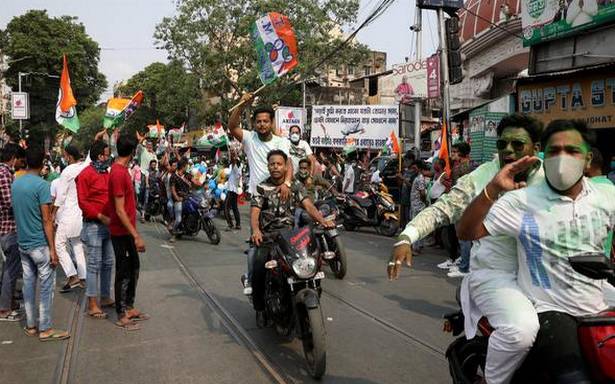 Impact of setback in West Bengal, COVID wave on U.P. and Gujarat elections next years

BJP’s failure to breach fortress Mamata Banerjee in West Bengal and drawing a blank in Kerala was only offset by its return to power in secure numbers in Assam and victory of the NDA in Puducherry. Challenges for the BJP are, however, both organisational and existential.

Who will be CM in Assam?

In Assam for example, the BJP’s victory has thrown up the interesting conundrum of just who should be the new chief minister — sitting Chief Minister Sarbananda Sonowal or Health and Finance Minister Himanta Biswa Sarma, who is the BJP’s power house in the northeast holding its alliances in several States together, and managed to steer the anti-Citizenship Amendment Act (CAA) protests away from politically harming the BJP in the State. Senior party leaders have been saying that the party’s parliamentary board will be taking a view on the matter, meaning that a question mark is hanging on the issue.

In West Bengal, it has become clear that the constituency that rose to give BJP 18 seats in the 2019 General Elections has somewhat shifted back to the Trinamool Congress, a consolidation of women and minority votes also seems to have helped Mamata Banerjee. As BJP general secretary in charge of West Bengal Kailash Vijaywargiya said, “It seems Bengal wants Mamata Banerjee as chief minister.” He also added that the fear of contracting COVID-19 may have kept BJP voters at home.

In the major reasons for its failure to win, BJP leaders point out that the lack of a local face as a chief ministerial candidate hurt them, but more importantly an over dependence on TMC defectors for both organisational heft and as candidates didn’t go down well with the electorate. Many of the high profile turn coats including former ministers in the Mamata Banerjee government lost the polls.

The big issue, however, is more deep, and that has to do with the gigantic second wave of COVID-19 that is battering India. The BJP, which always sought the “party of governance” badge for itself, is now floundering on that score. BJP has always pointed out that the old Congress slogan against the Jan Sangh (BJP’s earlier avatar) of “shaasan karna koi khel nahin, Jan Sangh ke diyon main tel nahin (governance is not a game, these lamps of Jan Sangh have no oil — lamp being the Jan Sangh symbol), no longer applied to them as governments led by the party have been re-elected for multiple terms both in States and at the Centre.

And while the jury is still out whether the second wave of COVID-19 and the long drawn out polling schedule had a bearing on the TMC victory and the BJP’s loss, next year’s electoral calendar is looming large.

Gujarat and Uttar Pradesh, two States that are being battered by the pandemic and a health and governance infrastructure that is tottering and failing are scheduled to go to polls next year. Both are States that have sitting BJP governments, and the party’s own fortresses will be under siege. While the BJP has become a party of meticulous electoral planning and execution, the performance of its governments in these two states will be under the scanner, as of that of the Central government.

Join us at 7:00 p.m. on The Hindu’s YouTube channel to discuss the results of the 2021 Assembly Elections live.

The Hindu’s Resident Editor in Delhi Amit Baruah, Political Editor Nistula Hebbar and Deputy Editor Sandeep Phukan will take us through the election results and discuss what to expect next.