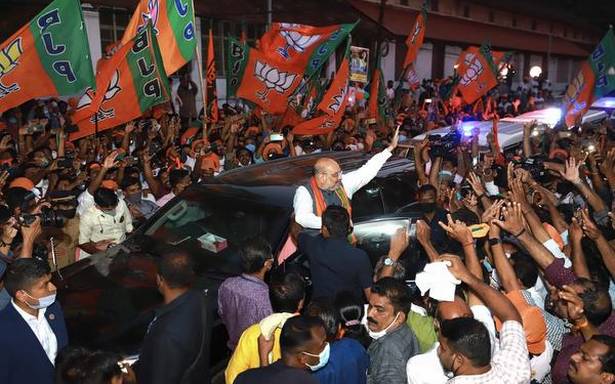 Hundreds of party workers waited for nearly two hours for the arrival of NDA’s top campaigner.

NDA leaders said the arrival of Mr. Shah gave new energy to their electioneering in the district. NDA candidates M.T. Ramesh, Navya Haridas and V.K. Rajeevan, contesting from Kozhikode North, Kozhikode South and Kunnamangalam constituencies respectively, were present along with Mr. Shah in the campaign vehicle.

The city was under tight security cover in view of the Union Home Minister’s visit. Police officers had a tough time controlling the crowd and clearing the way for his vehicle. Mr. Shah left the city by 7.30 p.m.