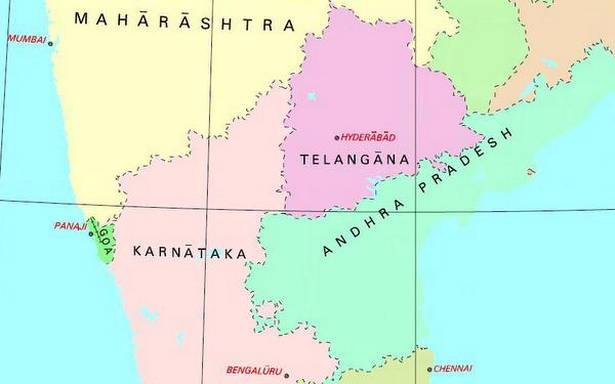 It mentions Hyderabad as the administrative headquarters of A.P.

The redrawn political map of India, released by the Centre depicting the newly formed Union Territories of Jammu and Kashmir and Ladakh, has no mention of Amaravati as the Capital of Andhra Pradesh reinforcing the claim of the ruling YSR Congress Party that the previous TDP government had not notified ‘Amaravati’ as the Capital of the State.

The map published by Survey of India continues to show Hyderabad as the administrative Capital of Andhra Pradesh like it did in the editions of the map published post bifurcation.

As per the AP Reorganisation Act, Hyderabad is the common Capital for both Telugu states for 10 years from 2014.

The map also mentioned that the ‘administrative headquarters of Andhra Pradesh and Telangana are at Hyderabad’. However, this has surprised netizens who wondered why there was no mention of the Capital region for which construction Prime Minister Narendra Modi laid the foundation stone. Nearly two months ago, Municipal Administration and Urban Development Minister Botcha Satyanarayana raised a question whether the gazette notification had been issued by the previous TDP government marking the Capital Amaravati and accused it of not making efforts to have a permanent administrative Capital.

TDP MLA A. Satya Prasad refuted the claims stating the Capital had been notified in the gazette and government orders issued on December 30, 2014. Former Minister and TDP leader Y. Ramakrishnudu asked why the government is sitting in Amaravati if it had not been notified. However, though the government orders (253 and 254) ‘Declaration of AP Capital City Area’ mentioned details of the mandals included in the State Capital and its extent, there was no mention of the name of the Capital.

Meanwhile, the government constituted an expert committee with urban planning experts to suggest a comprehensive strategy for all-round development of the State, including the Capital. The committee is also accepting suggestions from the people. Suggestions can be emailed to [email protected] gmail.com and letters can be sent to No. 56-15-53, Vinayaka Temple Rd, Patamata, Vijayawada, 520010 on or before November 12.