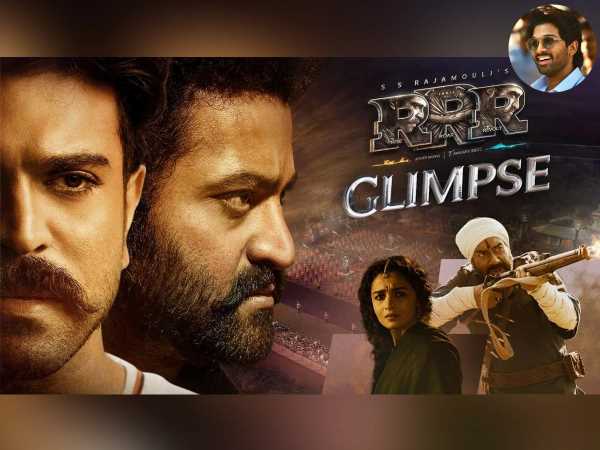 The makers of RRR shared a teaser/glimpse  of the film on Monday  which is grabbing the attention of the movie lovers and the celebrities.  The SS Rajamouli directorial venture claims to “bring back the glory of Indian cinema” and so it does. The RRR glimpse starts  with a gripping background score and an aerial shot of where the story of Jr NTR and Ram Charan starrer is set.  After watching the RRR Glimpse, Icon Star Allu Arjun took to his Twitter and said: What a mind blowing glimpse of #RRR. Rajamouli garu you the pride of Indian Cinema . My brother  Ram Charan & my Bava  Jr NTR Power Pack show . Congratulations to  Ajay Devgn garu , dear  Alia Bhatt and the entire cast & Crew . Watch it now.”

After watching the glimpse, Allu Arjun is mind blown. Allu Arjun has called Rajamouli the pride of Indian cinema.

Rajamouli’ magnum opus RRR, set in the 1920’s is a “fictitious story based on two legendary freedom fighters – Komaram Bheem and Alluri Seetharamaraju.”

RRR, which is bankrolled by DVV Danayya and the music by MM Keeravani, also has Ajay Devgn, Alia Bhatt, Olivia Morris, Samuthirakani, Alison Doody, Ray Stevenson in the crucial roles.