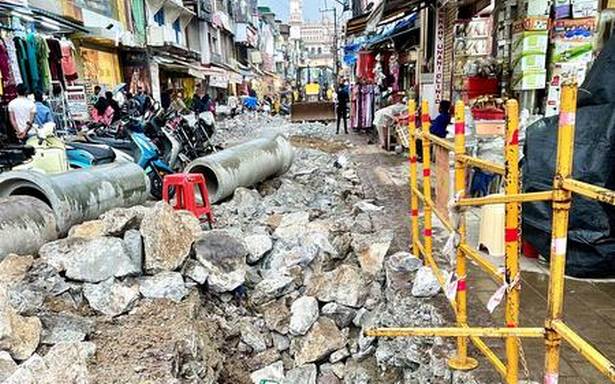 ASI unaware of the work and nature of permission secured

Hyderabad’s iconic landmark Charminar faces one more vibration test as the Hyderabad Metro Water Supply and Sewerage Board is relaying the botched pipeline near the monument.

“We are replacing the eight-inch pipeline with an 18-inch pipeline to take the sewerage load. The older pipeline was getting frequently blocked leading to flooding in the area,” said a HMWSSB official supervising the work near the Laad Bazaar stretch. The sewerage line has been repaired a few months earlier on the south-western side of the monument due to water stagnation problem.

The civic body has deployed an earthmover-powered pneumatic drill to tear the cobblestone flooring and the six-inch reinforced concrete base to reach the old pipeline buried five feet below ground.

When the pipeline was laid earlier, the Archaeological Survey of India (ASI) raised an alarm over the proximity of the earthen work to the stone-and-limestone Charminar built nearly 430 years ago. The ASI officials said the seepage from pipeline and capillary action of limestone will prove disastrous for the long-term structural stability of the monument.

“We are doing it over a 240-metre stretch that will begin at the Charminar PS and end near Moti Galli. The older pipeline was getting blocked and we had to clean it every three days. With the new 450-mm pipeline the problem will be solved,” said a Water Board official. The Charminar PS is yards from the base of Charminar. “The permission for the work has been secured by the civic body to carry out the work,” said the official setting a one-month deadline for finishing the work.

When contacted, ASI officials said they were unaware of the work near the nationally protected monument and the nature of permission secured by the civic body.

The pipeline work has again upended the business of shopkeepers at Laad Bazaar. “There is no planning. They finished the work during Deepavali 2019. We have to suffer losses again as visitors don’t like to walk in these conditions,” said Inayatullah, who runs a cloth store in the area. “We used to dangle our feet and sit in the shop. They have laid so many layers of road that now the shop and the road level are the same,” the shopkeeper said.

“The vibration from the drill can be felt even nearly 20 feet away. This will pose a threat to not just Charminar but also the Shahi Jilu Khana Kaman which is in a dilapidated condition due to neglect and encroachments,” said Sibghat Khan, an architecture student.

According to a study, a pneumatic drill creates a mean of 116 decibel (dB) and peak of 130 dB noise levels that matches the effect of a jet taking off from an aircraft carrier. What such constant noise and vibration can do to a 430-year-old monument is anybody’s guess.