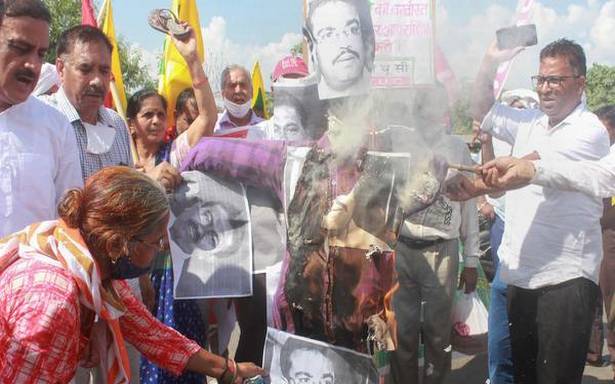 The mowing down of farmers in the Lakhimpur Kheri incident, in which his son Ashish Mishra is accused of murder, is not the first burning controversy in the life of Ajay Kumar Mishra, Union Minister of State for Home Affairs. Before he entered State-level electoral politics, Mr. Mishra was in the year 2000 accused of murdering a youth leader of the Samajwadi Party in Tikonia. A local sessions court acquitted Mr. Mishra and three others in March 2004 in the murder case of Prabhat Gupta alias Raju.

A criminal appeal filed by Prabhat Gupta’s brother Rajeev Gupta is pending before the Allahabad High Court, which had in March 2018 reserved the judgment in the appeal, but since it could not be delivered later that year, Gupta’s family prayed for it to be heard again. The last hearing in the case was on February 5, 2019.

“If justice was prompt, then justice would not have deviated somewhere,” Mr. Rajeev Gupta, who is still pursuing the legal case, told The Hindu.

On September 7, a month before the incident in Tikonia in which eight persons were killed, a Division Bench of Justices Rajan Roy and Suresh Kumar Gupta directed the Uttar Pradesh government to submit a report and restore the security which was earlier granted to Rajeev Gupta till it disposed the writ petition filed by him, which was kept pending.

Mr. Gupta had approached court alleging that he faced a threat to his life, submitting that the accused in the murder case of his brother was not just an MP but also a Minister in the Government of India. Mr. Gupta is the pairokar of one of the witnesses in the case, Sanjeev Gupta, who is also his brother. Mr. Gupta had told the court that the district authorities in Kheri did not pay heed to his request for providing security and that he did not expect fair play as the accused is an influential Minister, according to the High Court’s order.

Though the lower court acquitted Mr. Mishra, who was a vice-president of a district cooperative bank at the time the allegation against him was made, Mr. Gupta maintains his charge 21 years after his brother was shot dead on July 8, 2000 and also claims there were several attempts made during this period to deter him from fighting the case.

“My father died fighting the case. My brother was shot in his temple. Why else would we fight this case till today?” asked Mr. Gupta, who is now associated with Shivpal Yadav’s party.

According to the FIR lodged in 2000 and the revision petition filed by his father Santosh Gupta in 2004 in the Allahabad High Court, it was alleged that Prabhat Gupta and Mr. Mishra had rivalry over a recently held panchayat election and on July 8, 2000 when Prabhat Gupta was going to his shop from his house, he was fired at on his temple and between his chest and abdomen. He fell on the ground and died, said the revision petition. The family accused Mr. Mishra and three others.

Mr. Mishra did not respond to messages seeking his response. However, on October 5, while answering questions on his past record, Mr. Mishra said that “all cases against me had concluded in my favour”. He said the cases lodged against him in the past were “fake” and attempts to implicate him had “failed”. “I have never been lodged in a thana (police station) and I have never been to jail,” Mr. Mishra told reporters.

On September 25, while warning protesting farmers to “mend themselves” or else he would “not take more than two minutes to mend them” himself, Mr. Mishra had also reminded them of his past record before he was elected a public representative and said that he did “not run from any challenge”. It was this statement that allegedly triggered the protests by farmers on October 3.