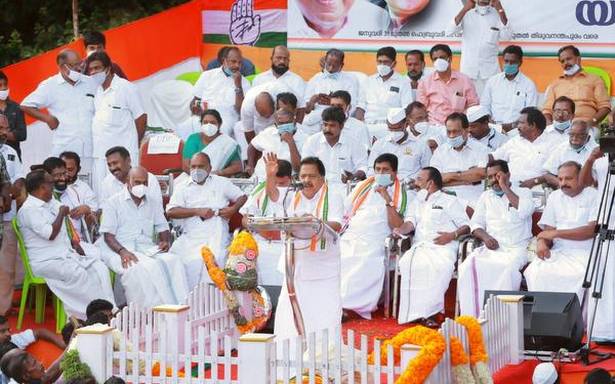 The Aishwarya Kerala Yatra led by Leader of the Opposition Ramesh Chennithala, entered its final leg on Sunday.

It would formally conclude with a massive rally in Thiruvananthapuram on February 23. Congress leader Rahul Gandhi, MP, would address the marchers alongside a galaxy of national and State level party leaders.

Mr. Chennithala capped his State-wide marshalling of party workers with an explosive charge against the government.

He accused the LDF of kowtowing to the interests of foreign trawlers at the risk of imperilling the livelihood of fisherfolk.

Mr. Chennithala’s move was seen as a political gambit to shore-up the Congress’s traditional base among the fishing community. Coastal folk reckoned to be steadfast Congress voters had shown signs of wavering in coastal districts in the local body polls.

Mr. Chennithala’s allegations appeared to have touched the government on the raw, prompting Chief Minister Pinarayi Vijayan to order a review of the preliminary agreements struck by two State corporations with the foreign fishing company. It also drew angry denials from Ministers and the CPI(M) leadership.

The defection of the National Congress Party (NCP) legislator Mani. C. Kappan from the LDF to the UDF was reckoned as a coup for Mr. Chennithala.

He rounded off the ‘win’ by persuading Mr. Kappan to join the Yatra when it entered Pala.

Some sections in the Congress had blamed Mr. Chennithala for Kerala Congress (M) leader Jose. K. Mani’s exit from the UDF., The Leader of the Opposition, appeared to have redeemed himself of the charge by pitting Mr. Kappan against Mr. Mani in the prestigious Pala constituency.

Mr. Chennithala also raised the issue of backdoor appointments and non-appointment of PSC rankers to put the government on the backfoot.

The yatra also took a battering from the LDF for towing a soft Hindutva line, pandering to the interests of Islamist outfits and capitulating to the IUML’s diktats. It also drew for flak for ‘struggling’ to present a UDF policy declaration and aims to counter the LDF’s election manifesto.

The yatra was also a litmus test of Mr. Chennithala’s popularity as a mass leader.