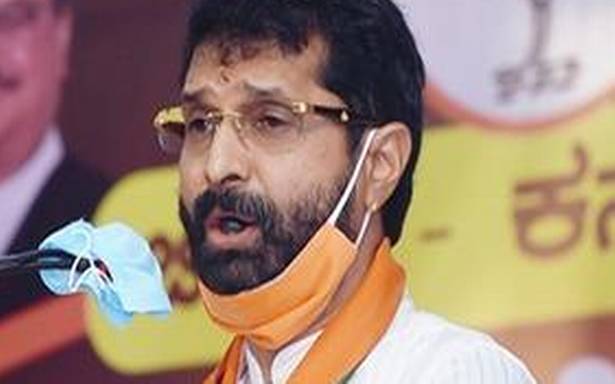 C.T. Ravi, BJP national general secretary in charge of Tamil Nadu, made it clear on Monday that any decision on the chief ministerial candidate for the Assembly election would be made by the AIADMK.

He conceded that the ruling AIADMK was a major partner in the National Democratic Alliance in the State and the BJP a minor partner. “The AIADMK in Tamil Nadu…, they are the major partner [in the NDA]. They will decide who is the chief ministerial candidate. We [the BJP] are the minor partner,” he said.

The statement marks a change in the BJP’s stand that the national party would decide on the chief ministerial candidate after the election, and the AIADMK was free to choose its candidate. The AIADMK has already fielded Edappadi K. Palaniswami for the top job.

Mr. Ravi recalled that Mr. Palaniswami and Deputy Chief Minister O. Panneerselvam had said in the presence of Union Home Minister Amit Shah at an event recently that the AIADMK was part of the NDA.

The BJP and its State leaders, especially president L. Murugan, had said the BJP’s parliamentary party board and the NDA co-ordination committee would decide on the chief ministerial candidate. However, the AIADMK’s general council meeting declared Mr. Palaniswami the party’s candidate for Chief Minister.

Speaking to reporters in Tiruchi, he claimed that the BJP had become stronger in the State now as compared to previous years and the people of the State would extend good support to his party. “Our workers and leaders were doing good work and I hope we will get good results in the coming elections,” he told reporters.

Stating that the BJP cared for the people of Tamil Nadu, he said Prime Minister Narendra Modi had given more schemes for the State. The BJP would gain people’s trust, he further said.