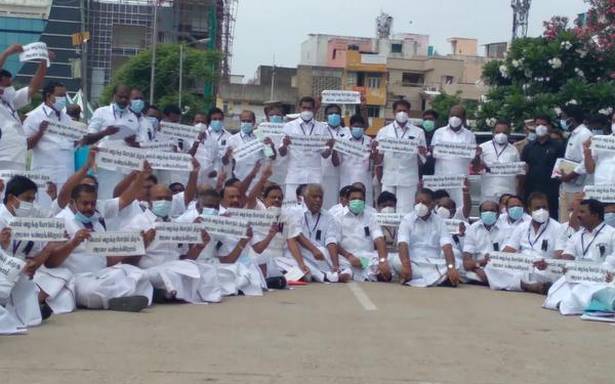 The party accused the DMK of foisting “false cases” on the Opposition; said Palaniswami’s attempt in the Assembly to raise an issue concerning Kodanad case had been foiled

The AIADMK on Wednesday decided to boycott the TN Assembly proceedings for the day and on Thursday.

Referring to how the AIADMK’s co-coordinator and Leader of Opposition Edappadi K. Palaniswami’s attempt in the Assembly to raise an issue concerning the Kodanad dacoity-cum-murder case was foiled, O. Panneerselvam, Deputy Leader of Opposition and the AIADMK’s coordinator, accused the DMK regime of trying to foist “false cases” on the Opposition. Instead of fulfilling its electoral assurances and resolving problems of the people, the ruling party had sought to adopt an approach of “unruliness.”

Mr. Palaniswami contended that the trial into the case was almost at the stage of conclusion. It was against this backdrop that one of the accused had been summoned by the police and there were reports in sections of the media that a statement had been obtained from the accused against him and other functionaries of the party. “We strongly condemn this,” Mr. Palaniswami said, wondering why “DMK lawyers” had been appearing for those who had been cited as the accused in the case.

In a statement, the two AIADMK leaders expressed surprise and sadness over Chief Minister M.K. Stalin for leaving out, in his address on Independence Day, the name of freedom fighter Alagumuthu Kone as one among those who had contributed to the country’s freedom. They recalled how the AIADMK, while in power, had raised a statue in Chennai and a memorial in Thoothukudi for the freedom fighter, apart from naming a transport corporation after him.