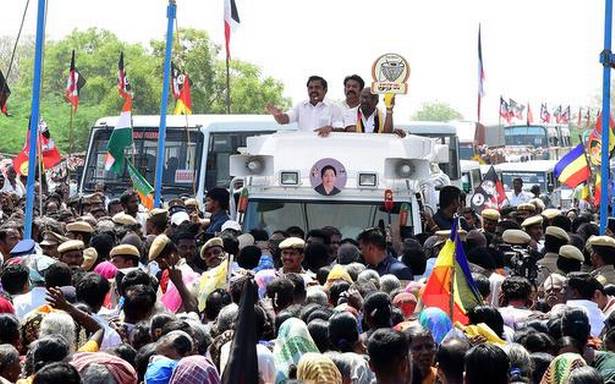 Leaders point to anti-Modi wave, miscalculations in seat allotment and consolidation of minority votes against the alliance

The ruling AIADMK has begun quietly introspecting over its dismal performance in the Lok Sabha polls.

Though the party has not called a meeting of its office-bearers or district secretaries to discuss the factors that led to the electoral debacle, its leaders are engaged in private discussions on the matter with their friends, supporters and others.

They are quite disturbed over the steep erosion in the party’s vote share, which stood at 18.48% this time. “Our calculation was like this: We would have liked to get from each constituency 1.5% of the overall votes polled in the State. If we get only 1%, we may not win. But in this instance, we did not get even 20% from 22 seats,” a Minister explained.

While some leaders acknowledged that the anti-Modi narrative had an important role to play in shaping the intention of the people to vote against the AIADMK-led combine that included the BJP, the PMK and the DMDK, senior figures in the ruling party said there were other factors too.

Unlike in the case of the DMK-led coalition, which has been running a coordinated campaign against the Centre and the State government for over two-and-a-half years, the AIADMK-led front was formed only a few weeks prior to the election. The fact that the PMK and the DMDK had been highly critical of the AIADMK government and its Ministers for much of the last few years resulted in a failure to create any sense of cohesion among workers of the ruling party’s front or convince the voters.

Considering the fact that the DMDK lost its deposit in two Lok Sabha constituencies (Tiruchi and North Chennai) and the “emotional bond” that members of the AIADMK have with Dindigul (which was allotted to the PMK), there is a feeling in the ruling party that it should have contested these seats. “At least we would have had some satisfaction that the party had done its best,” said another leader.

He also conceded that infighting in the Dindigul district unit of the party, especially between factions owing allegiance to Forest Minister Dindigul C. Sreenivasan and former Electricity Minister Natham R. Viswanathan, was the factor that forced the leadership to gift the seat to the PMK. Dindigul was where the party registered its maiden electoral success in 1973.

Besides, the consolidation of votes of minorities – Muslims and Christians – did in the AIADMK combine. Though this was not unexpected in view of the BJP’s inclusion in the front, the ruling party had made efforts to present itself as a pro-minority party. But this apparently did not cut ice with the minorities.

Invariably, several leaders of the AIADMK felt that a section of government employees had worked against the ruling party for the way the government had handled the employees’ strike. Apart from the efforts of the Opposition, a ‘campaign’ was carried out ‘subtly’ by officials in many districts, alleging that a vote for the AIADMK’s front would mean the end of the Mahatma Gandhi National Rural Employment Guarantee Scheme. This made women in rural areas take it seriously, the leaders claimed, citing this factor as the main reason for the loss of women’s support for the party in rural areas.

Besides, “lucrative promises” like a waiver of farm loans also contributed to the Opposition’s victory, they said.

All these explanations hold good only for the Lok Sabha polls and not for the Assembly byelections, where the party’s performance was relatively better.

When asked why these factors did not have a similar impact on the byelections, the leaders contended that the people were not inherently against the State government and were “only against the Modi regime”.