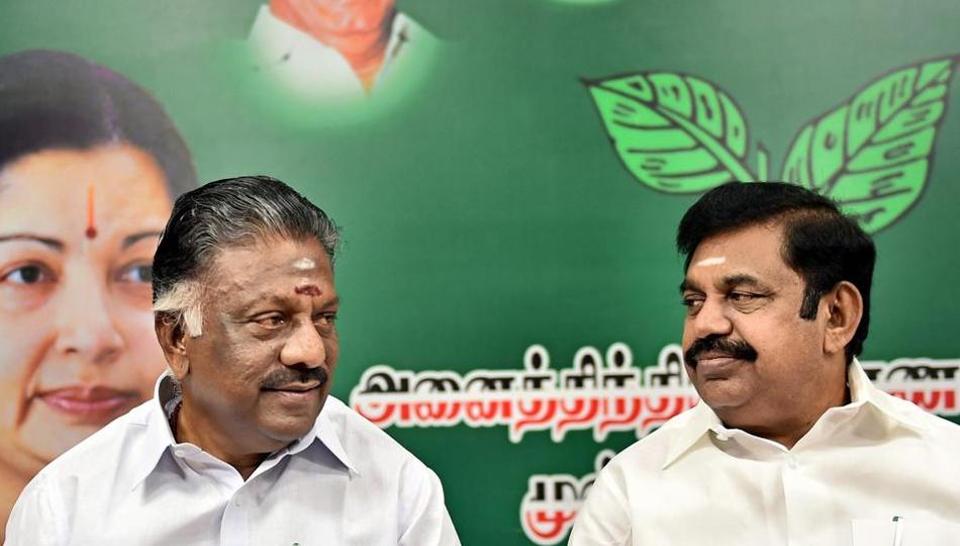 After the rout in the Lok Sabha poll in Tamil Nadu, the AIADMK met for an introspection on Monday with Chief Minister Edappadi K Palaniswami (EPS) and Deputy CM, O Panneerselvam (OPS) holding discussions with each of the party district secretaries and MLAs at the former’s residence.

While OPS is convenor, EPS is the joint-convenor of the ruling party in Tamil Nadu.

The exercise which lasted for nearly two hours had the twin objective of ascertaining the reasons for the party’s pathetic performance in the elections and to prepare it for the upcoming civic poll for the local bodies, AIADMK sources said.

Earlier, some ministers had blamed the tie-up with the BJP as well as with the OBC-Vanniyar dominant Pattali Makkal Katchi (PMK) and the Desiya Murpokku Dravida Kazhagam (DMDK) of actor Vijayakanth for the party’s disastrous performance. In their view, while teaming up with the saffron party resulted in the loss of minority votes, the other two parties have been vocal critics of the AIADMK government till the alliance was struck.

Of the 38 Lok Sabha seats which went to polls, the AIADMK could win only in Theni, where OPS’ son, Raveendranath Kumar emerged victorious. However, the party managed to retain its majority in the state assembly, by winning nine of the 22 seats for which bypoll was held together with the Lol Sabha elections. More than the drubbing, what had rattled the AIADMK is the sharp decline in its vote share from over 40 % to 18.48% this time.

Monday’s meeting of the AIADMK also took place in the background of the party not getting a berth in Prime Minister Narendra Modi’s new cabinet.

According to party insiders bitter infighting within the AIADMK on arriving at a consensus candidate to join the central ministry had resulted in the party being left out of Modi’s new team. And the party is speaking in different voices on this.

While AIADMK veteran and Fisheries Minister D Jayakumar maintained that the party was not invited for ministry formation since the BJP had a majority of its own, his cabinet colleague, Rajenthira Bhalaji said that while they demanded two to three berths, the BJP had offered only one and that the party was yet to make up its mind on this.

“They (BJP) have a majority. Had they fallen short of, say 15 seats or so, our support would become necessary. They did not call us yesterday, but they might call us tomorrow. The situation could change in the future,” he told reporters on Sunday, after an Iftar party hosted by the DMDK.

However, Bhalaji denied that the party had been overlooked by the BJP. “There is no truth in reports that we have been overlooked and denied a berth in the Union cabinet. We have sought two or three ministerial berths. But, they have offered only one. We are yet to take a decision on that. EPS and OPS would take a call on this,” he told reporters.

However, it is believed that the party’s inability to choose a consensus candidate had cost it dearly. While, OPS wanted it for his son, a first time MP, EPS batted for party veteran and Rajya Sabha memer, R Vaithilingam, people familiar with the developments said.

06/03/2019 India Comments Off on AIADMK analyses poll debacle, divided on not getting Union cabinet berth
India