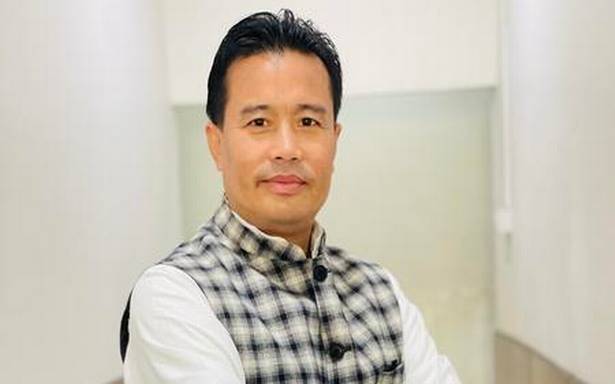 The Bharatiya Janata Party may use the Assam formula in poll-bound Manipur — not project anyone as the Chief Minister for a possible change of leadership.

Sarbananda Sonowal was the BJP’s face for the 2016 election campaign in Assam. But the party changed its strategy for the 2021 State polls to eventually hand over the baton to Himanta Biswa Sarma.

A senior central leader of the party groomed by the Rashtriya Swayamsevak Sangh said the BJP’s approach to the 2022 polls in Manipur could follow a similar trajectory and one of the frontrunners is Minister Thongam Biswajit, whose portfolios include Panchayat and Rural Development.

“There is a strong undercurrent within the party in Manipur for a change of leadership in view of a few crises the BJP-led alliance government faced in the State over the last three years,” the senior leader said on condition of anonymity.

Mr. Biswajit, in the good books of the RSS, is considered a natural choice for the Chief Minister’s post if the BJP retains power on its own or in alliance with its current or new partners. This was because he was a strong contender for the top job when the BJP managed to form a coalition government in 2017.

But the central leadership opted for incumbent Nongthombam Biren Singh, an import from Congress. Mr. Biswajit, who had played a major role in bringing Mr. Singh to the BJP fold, had taken this in his stride and chose to be the background operator for strengthening the party base, BJP workers in the State said.

“BJP is a family and I value the faith the party has in me. I shall perform whatever role our central leadership decides for me,” he told The Hindu from State capital Imphal.

“Right now, my objective is to ensure the BJP comes back to power with more than the 21 seats it won in 2017. Maintaining strategic relations with our current allies, who may not go for a pre-poll alliance, is also a major responsibility,” he said.

Predicting less than 10 seats for Congress in the 60-member Assembly, Mr. Biswajit said the chances of its ally National People’s Party would depend on the BJP.

“We have at least two ticket aspirants in each constituency and those who miss out are likely to go to NPP, which appears to be the most bankable party after BJP. This has made us more determined to field the best candidates,” he said.

Mr. Biswajit said he had analysed 12 of the 60 seats where the BJP candidates lost by less than 1,000 votes and six more where the margin of defeat was less than 500 votes. “We are better prepared this time,” he said, admitting that his portfolio aided his grassroots connect more often than others.

He trashed speculations about a BJP-NPP rift and said the other regional partner, the Naga People’s Front, is also expected to stay with the BJP in the event of a hung House.

The NPP had withdrawn its support to the BJP during a power struggle in 2020 but returned to the government following the intervention of Home Minister Amit Shah.

Mr. Biswajit said the BJP has been working on bridging the hill-valley divide besides fighting for Scheduled Tribe status for the Meitei people, who dominate the Imphal Valley that accounts for 40 of the 60 Assembly seats. “We are gaining the trust of the hill dwellers who are seeing through the Congress propaganda that the BJP is anti-Christian,” he said.

Mr. Biswajit is a three-time MLA, having first won his pet Thongju constituency on a Trinamool Congress (TMC) ticket in 2012. He was one of three TMC legislators who quit mid-term to join the BJP and won the seat in the 2015 by-election along with another turncoat, Khumukcham Joykishan, who got re-elected from the Thangmeiband seat.

12/25/2021 India Comments Off on Ahead of Manipur polls, BJP mulls leadership change
India