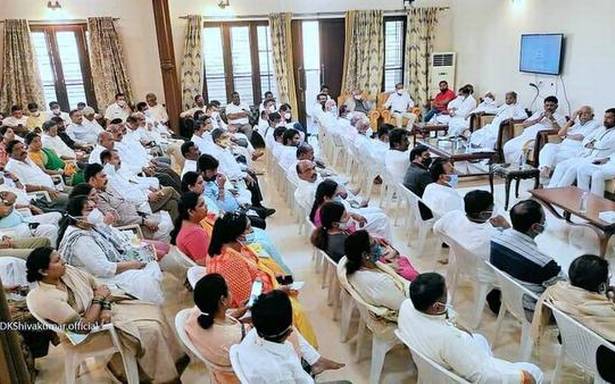 Mekedatu issue is in court and Congress should behave responsibly: Araga

Ahead of the Congress’ 10-day padayatra from Mekedatu to Bengaluru on Sunday, Home Minister Araga Jnanedra warned that cases will be booked under the State Disaster Management Act against all those who were found violating COVID-19 week-end lockdown.

Speaking to reporters here on Saturday, he said the police had to act in a cautious manner and the public had to extend support to the Government for effective implementation of curbs for containing the rising pandemic cases in the State.

Terming the Congress padayatra as politically motivated, the Home Minister said the curbs had been imposed as a preventive measure to check the spread of COVID-19 cases. Matters related to the Mekedatu project were pending in the Supreme Court and the Congress had to behave in a responsible manner while raking up issues related to the project, he said.

An official in Ramanagaram district told The Hindu that the district administration had made elaborate arrangements to check the violation of COVID-19 guidelines issued by the Government.

The Police Department had erected barricades all over the district and deputed a large number of personnel to handle the situation as the political showdown continued between the ruling BJP and the Congress on the issue.

As per Congress leaders, a large number of workers were expected to participate in the padayatra from surrounding districts. Depending on the situation on Sunday, the police would take action against the organisers of the padayatra, sources said.

Meanwhile, Congress leaders held a meeting at the Kanakapura residence of Mr. Shivakumar in which they discussed the measures to be taken to prevent legal action if they take out a padayatra. They are also learnt to have discussed alternative plans if the police went ahead in preventing their padayatra.

01/08/2022 India Comments Off on Ahead of Congress padayatra: Home Minister warns of action against violators of COVID norms
India