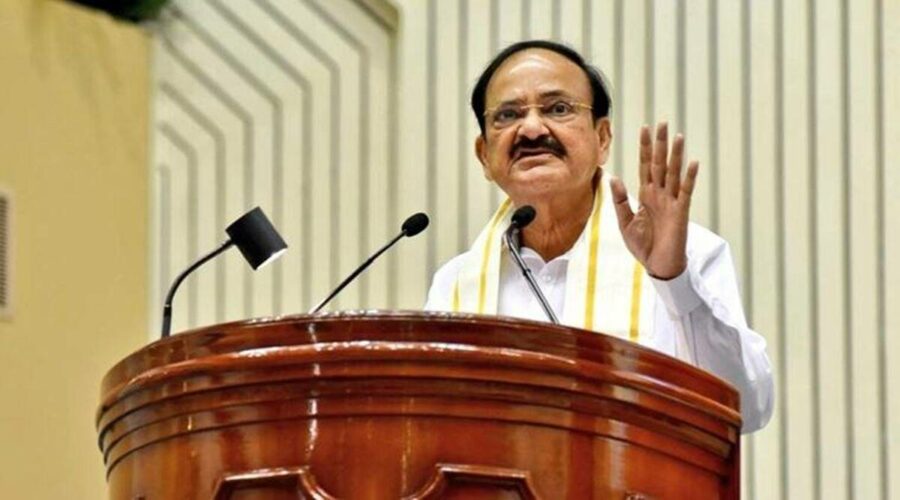 Naidu was addressing a gathering in Gurgaon after releasing five volumes of collected works of speeches and writing of Sir Chhotu Ram, the co-founder of National Unionist Party and prominent politician in pre-independent India. Vice-President M Venkaiah Naidu on Sunday said that agriculture was the “backbone of our economy” and called for unshackling the potential of rural economy to ensure income security for farmers.

“Agriculture is the basic culture of India. Half of the country today depends on agriculture. Our villages not only produce foodgrains but they also inculcate values and principles. All governments should give priority to welfare of farmers and ensure remunerative prices. There must always be a dialogue between farmers and government; however farmers’ problems should not be linked to politics. When it is linked to votes, then division happens,” he said.

Naidu was addressing a gathering in Gurgaon after releasing five volumes of collected works of speeches and writing of Sir Chhotu Ram, the co-founder of National Unionist Party and prominent politician in pre-independent India.

Heaping praise on the agriculture sector and work ethic of farmers, Naidu said that even during Covid, when all other sectors of the economy had suffered, production in agricultural sector increased for two successive years.

“You must remember a government had fallen due to onion prices. There should be one market for all, without restrictions, and support prices should be raised from time-to-time. But, I am not in favour of government procuring all the produce. The government should procure when there is no demand in the market. Otherwise, commission agents will exploit farmers,” said Naidu, adding that he was not referring to any particular party or government on this.

“I am not in politics. I have retired from politics, but not tired from public life. I am myself son of a farmer,” he added.

Naidu reiterated that there was a need to look beyond politics of freebies in addressing the needs of farmers. “Farmers need infrastructure – uninterrupted power supply for 12 hours, roads [to their villages], water, timely credit, market, godowns. They need permanent projects, not populist schemes,” he said.

Calling Sir Chhotu Ram a “renaissance” man, Naidu credited him for initiating major agricultural reforms in undivided Punjab and for freeing farmers from exploitation of money lenders. “He brought new ideas (setting up mandis, Bhakra dam on Sutlej) in polity and worked for the cause of nation building. He always worked for the uplift of marginalised, poor and farmers. The youth should read about the life of such visionaries and take inspiration,” he said.

In the evening, the Vice-President felicitated Paralympian athletes, who won India’s highest ever tally of medals at Tokya Paralympics. Praising their grit and determination, Naidu said, “You have made us all proud. The nation salutes you. In these dismal times, when there is so much uncertainty, you have shown us a ray of hope. You had to face so many adversities – conditions were tough due to Covid, stadia were closed, your training was affected – yet you have triumphed and your accomplishments are an inspiration for every Indian.”

Calling for the need for a sporting culture, he heaped praise on the efforts of Haryana government in creating infrastructure and supporting sportspersons.

Haryana Chief Minister Manohar Lal Khattar, who attended both the events, said the state was a hub of sports and complimented athletes for a stellar performance at the Olympics. “Entire society gets inspiration from your achievements. I have told the officials that do not worry about the budget and to just focus on performance. We have created infrastructure for sports in the state. We have also put in a mechanism where athletes can claim their cash rewards immediately. Gone are the days when sportspersons had to wait for days for their rewards,” he said, adding that he will soon inaugurate an Olympic Bhavan in Faridabad, where a para-sports centre for athletes will be built.

Recalling his own story of comeback into the hockey team after suffering a gunshot injury, Sandeep Singh, Minister of State for Sports and Youth Affairs, said he salutes the efforts of athletes who overcame so many hardships. “I have set an aim that in the next Paralympics, at least 100 athletes should participate and we win 50 medals,” he said.

Several athletes shared their stories of struggle, especially after Covid.

Harvinder Singh, who won bronze in archery, said that he practiced in a farm, since all the stadiums were closed during Covid.

“The medal is a result of nine years of struggle. I started practicing after watching London Olympics on television in 2012. The feeling is slowly sinking in. I want to thank the Haryana government for their support. Archery is an expensive sport.”

Singhraj Adhana, who won a silver and a bronze medal in shooting, said, “When I had polio at a young age, I told my mother that I wanted to run like other kids. She told me that if I really willed it in my mind, I definitely would run. Now I can say that I ran so fast that I reached Olympics and won.”

He said that after Covid, he decided to build his own shooting range for 10 m and 50 m. “I was quite upset when I could not train. The stadiums were closed during lockdown. I checked with my coach, who advised me that I should build my own range,” he said.

09/27/2021 India Comments Off on Agriculture is backbone of economy: VP Venkaiah Naidu
India