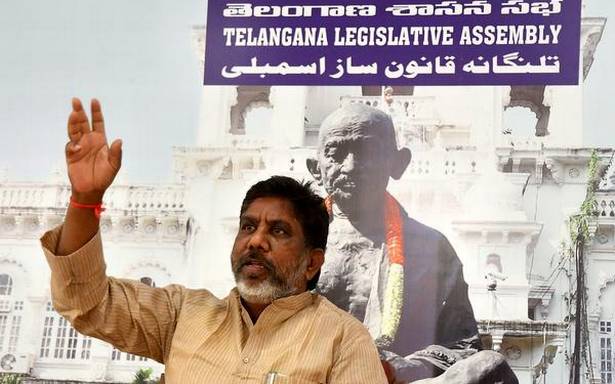 It only proves they are unable to govern, says Bhatti Vikramarka

Congress Legislature Party (CLP) Leader Bhatti Vikramarka has charged the ruling parties both at the Centre and the State have been shrugging of their responsibility and coming on to the roads in the name of agitations.

“BJP, which is in ruling at Centre, held dharnas before collectorates across Telangana yesterday demanding procurement of paddy from farmers by the State government. Today it was the turn of the ruling party in the State Telangana Rashtra Samithi (TRS) to hold dharnas in front of government offices in all districts. Who has to buy the paddy produced by farmers if not the State or Central governments? Will the US or Pakistan buy the paddy from our farmers?” asked Mr. Vikramarka while speaking to reporters here on Friday.

Charging both the parties with confining themselves to political gains instead of protecting the interests of farmers, the CLP leader said that it was shameful on the part of ruling parties taking up agitations instead of addressing the problem being faced by farmers. He has stated that both the parties have accepted that they are unable to rule and that was proved by their agitations.

“Farmers are being kept in confusion. By demonetisation, the economy collapsed and now they are pushing it further down. This is nothing but a conspiracy to handover the farming to corporates,” he commented.