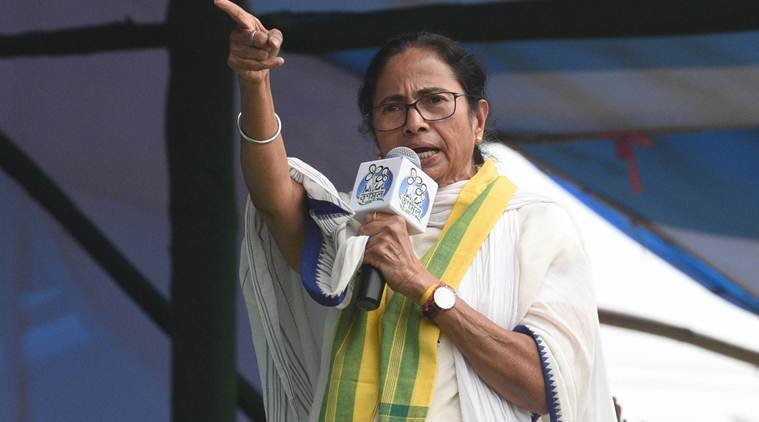 Mamata Banerjee said the swearing-in ceremony was an “august occasion to celebrate democracy” and not one that should be “devalued” by any political party which uses it as an opportunity to score political points. Hours after the BJP invited the families of 54 party workers allegedly killed in political violence across West Bengal to attend Prime Minister Narendra Modi’s swearing-in, Chief Minister Mamata Banerjee Wednesday said she will not attend the ceremony in Delhi.

Instead, she announced that she will travel to North 24 Parganas Thursday to protest against attacks on Trinamool Congress (TMC) party workers by the BJP after the Lok Sabha poll results last week.

On receiving an invitation Tuesday, Banerjee had said she would attend the event as a matter of “constitutional courtesy” after discussing the matter with other Chief Ministers.

“Congratulations, new Prime Minister, Narendra Modiji. It was my plan to accept the ‘constitutional invitation’ and attend the oath-taking ceremony. However, in last one hour, I am seeing media reports that the BJP is claiming 54 people have been murdered in political violence in Bengal,” she said on Twitter.

“This is completely untrue. There have been no political murders in Bengal. These deaths may have occurred due to personal enmity, family quarrels and other disputes, nothing related to politics. There is no such record with us.”

Banerjee said the swearing-in ceremony was an “august occasion to celebrate democracy” and not one that should be “devalued” by any political party which uses it as an opportunity to score political points. “So, please excuse me,” she said.

Earlier, the BJP invited family members of party workers who they claimed were allegedly in political violence in Bengal. The families Wednesday left for Delhi on trains.

Like Krishnendu Sarkar, whose father Shaktipada was killed at Mandirbazar in South 24 Parganas district on July 27, 2018. “We have been invited by the party to attend the swearing-in ceremony of the PM. Our primary aim is to get justice for my father. We are honoured that we have received the invite. This is the first time I am going to Delhi,” said Krishnendu.

At the Howrah Station before boarding the train, he was seen carrying a photograph of his father and was accompanied by his uncle Kaushik Purkayastha.

Mousumi Ghorui, the wife of Bubai Ghorui who was killed on December 22, 2018, at Usthi in South 24 Parganas district, said, “My family was shattered after the incident. We are now expecting a lot from the PM to bring justice to all the families who have come here today. We are also hoping that they will look after our families.”

According to the BJP, more than 80 people from such families will attend the swearing-in ceremony. “About 65 people are going aboard the Rajdhani Express to Delhi. Another 20 are going separately. In total, family members of 54 of our party workers are going to Delhi,” said BJP leader Tushar Kanti Ghosh, who is accompanying them. The party also booked their train tickets and will take care of their stay and other expenditure.

At the state BJP headquarters before leaving for Delhi, Yadav Sahis, a resident of Arsha village in Purulia district said the body of his son, Sishupal Sahis, was found hanging in the village on April 18. The party alleged that Sishupal was killed by TMC workers and hanged. “My son was a BJP worker. One day he left home and did not return. He was found hanging. The police have not done anything to arrest the culprits. We will raise this issue if we get a chance to speak to the PM,” said Yadav.

Meanwhile, a day after 29 of its 31 councillors in the Naihati municipality joined the BJP in Delhi, four more TMC leaders — MLA Manirul Islam, former MLA Gadadhar Hazra and two others — shifted loyalties Wednesday.

The TMC said it will not impact the party if one or two MLAs join the BJP. Speaking to reporters, TMC leader Tapas Roy said, “We will prove in 2021 whether the people are with us or not. The people are with Mamata Banerjee and they will continue to remain irrespective of the fact that some leaders are switching sides.”

05/30/2019 India Comments Off on After BJP calls families of killed, Mamata backs out
India