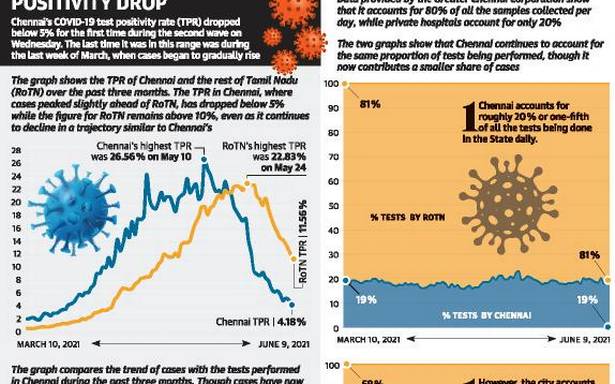 Intention is to plug all possible leakage of COVID-19 cases escaping the radar of the civic body: Gagandeep Singh Bedi

For the first time since the second wave of COVID-19 began, the test positivity rate (TPR) in Chennai on Wednesday dropped below the 5% mark. With 32,168 tests performed and 1,345 cases reported, the TPR was 4.2%.

The last time the TPR was below 5% was 75 days ago in the last week of March. The city was then reporting around 700 to 900 cases a day, while the tests performed were just around 15,000.

The cases, meanwhile, reached a peak in the second and third week of May with May 12 recording the most — 7,564 cases. While cases have now dropped below early-April levels, one month before the peak, the civic body has not reduced testing (infographic).

Importantly, the majority of the tests in Chennai are done by the GCC and only a smaller fraction by private labs. For instance, on Wednesday, 25,492 of the 32,168 samples, or roughly 80%, were collected by the GCC.

GCC Commissioner Gagandeep Singh Bedi said that the intention was to plug all possible leakage of COVID-19 cases escaping the radar of the civic body. “We do not want anyone with COVID-9 symptoms to go untested or not be in quarantine,” he said.

Stating that the civic body would continue to test more and not let down its guard, he added that various surveillance measures, including door-to-door checks by fever survey workers and asking private hospitals, scan centres and pharmacies to notify the GCC about symptomatic patients helped in bringing down the cases and the TPR.

He said that the GCC was also particular about curtailing the spread and ensuring the quarantining of patients at the earliest. “We have strictly asked private labs to inform us about positive results the night before so that the next day early morning our staff will be at the patient’s door step,” he said.

Prabhdeep Kaur, Deputy Director, National Institute of Epidemiology, Indian Council of Medical Research, said that testing could be brought down marginally if necessary while strictly monitoring the TPR and by ensuring that no new clusters are formed.

“There should, however, be no relaxation in testing certain categories of people, including the contacts of COVID-19 patients and all the people with ILI symptoms,” she said.