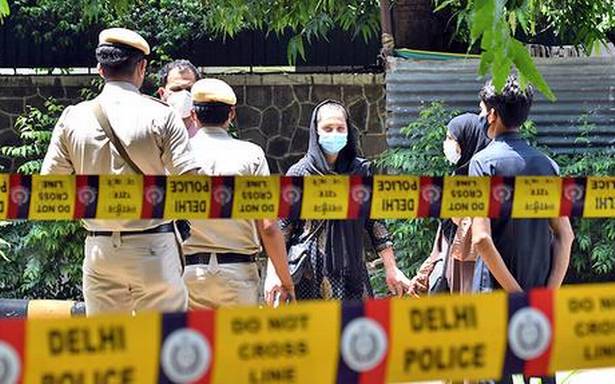 People who arrived at the Embassy of Afghanistan on Tuesday for paperwork and other formalities, recounted how the situation in Kabul had taken a drastic turn for the worse over the last couple of days.

With family members and relatives still in Kabul, some said the common citizen was paying the price for trusting a government that ultimately “fled”.

For Mohammed, who reached the national capital from Kabul on August 8 with three of his family members, it had been a close shave. “When we left Kabul, the situation was not as bad and it started to deteriorate only a couple of days later. It just got worse by the day and people were scrambling to get visas. We do not know how all of it happened so suddenly and silently. For a long time, we thought maybe the Taliban won’t reach Kabul very soon,” said the 32-year-old.

His sister is still in Kabul, Mr. Mohammed said. “She is a cancer patient and her husband is also out of town. She is now left with no access to money, as the banks have also closed. You cannot withdraw a single penny. We are worried about her and it is a horrific situation that people are going through.”

The Kabul resident is currently stationed in Lajpat Nagar. “We remember the pre-2000 era and even if the situation back home improves, people might not be ready to leave as the scars will remain. The common citizens are the ones who are the worst sufferers. The Ashraf Ghani government also promised us many things but ultimately they fled. It is shocking to see people fall off planes.”

Naweed Azimi, a 26-year-old documentary filmmaker who has been in the Capital for the last four years, said several of his relatives were still stuck in Kabul. “For the past few days, they have been trying to get a flight out of there, but it has become chaotic at the moment. Even a week back, things were better. Suddenly things changed drastically and now everything is shut and not safe at all.”

08/17/2021 India Comments Off on Afghans in India | “Everything changed suddenly, silently”
India