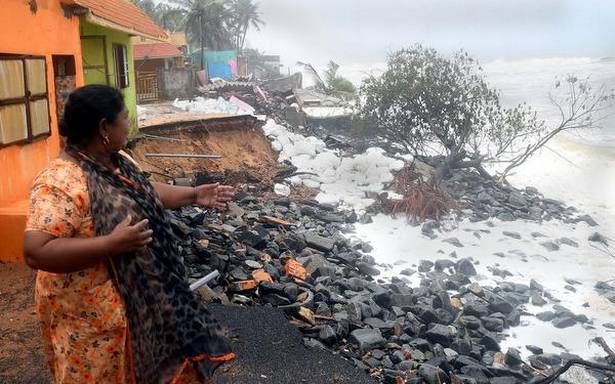 Kerala should urgently switch to nature-based and scientifically sound, multi-pronged solutions to protect its 590-km coastline from erosion, a team of scientists has said, pointing out that granite seawalls have proven counterproductive.

They urged the government to list mudflats, coastal wetlands, mangroves and sandy beaches as Ecologically Sensitive Zone-1 and confine mineral sand-mining in the coast to the public sector.

Erosion hotspots should be identified on the basis of field verification and studies. ‘Room for seashore’ should be adopted as a slogan and a participatory seashore management plan should be created. Coastal erosion maps should be created for the State, the scientists said.

“At severely eroded seashore, based on the importance of the landscape, hard structures will be needed. However, using granite for the purpose will lead to collateral damage which would cascade from the Western Ghats to the seashore. Use of reefs in shallow waters (as a primary defence), concrete wall, tetrapods, geotextile tubes, breakwater and so on should be undertaken after Morphological Impact Assessment. Priority should be given to places where human settlements are close to the sea,” they said.

In such locations, people living within 50 m of the high-tide line should be relocated without affecting their livelihood. In seashores with low erosion, and those which are prone to erosion or free of it, nature-based approaches such as sand dunes, mangroves, coastal vegetation are advisable. The emerging concept of ‘living shore’ should be adopted in such areas, they said.

At the hotspots/ESZ-1, sand-mining should be prohibited. New ports should be opened only after impact studies and consultation with the local communities, the report said.

The report noted that while the population density in Kerala is 859 per sq km, in the coastal lowlands, it stands at 2,022 per sq. km. The report recommended the government to treat the fishing community as ‘ecosystem people.’ Their locations should not be used for other commercial activities. In erosion-prone locations, only the traditional fishing community should be permitted to build houses, the report said.