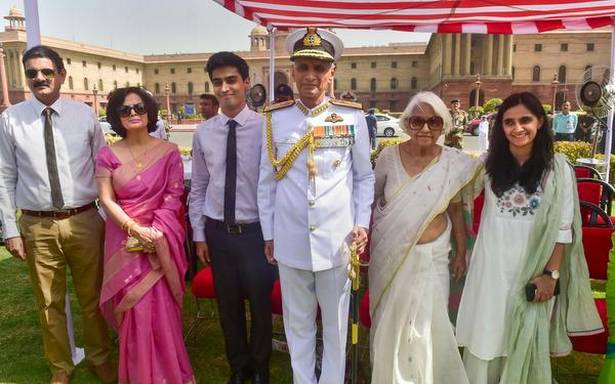 Prior to taking over, he was the Flag Officer Commanding-in-Chief (FOC-in-C) of Eastern Naval Command, headquartered in Visakhapatnam

Admiral Karambir Singh on Friday assumed charge as the 24th Chief of the Naval Staff (CNS). He took over from incumbent Chief Adm. Sunil Lanba, who stepped down upon retirement.

Prior to taking over, he was the Flag Officer Commanding-in-Chief (FOC-in-C) of Eastern Naval Command, headquartered in Visakhapatnam.

“Admiral Singh is the senior most Naval aviator. He is the first helicopter pilot of the Indian Navy to become over as CNS,” one Navy officer said.

The Navy said that during his long and distinguished service spanning nearly 39 years, Adm. Singh has served in a variety of Command, Staff and Instructional appointments.

However, Adm. Singh’s appointment was overshadowed by the plea filed by another senior officer challenging it.

Vice Adm. Bimal Verma, Chief of Andaman and Nicobar based tri-service command had approached the Armed Forces Tribunal (AFT) questioning the appointment as he was the seniormost Naval officer after Adm. Lanba.

Early this week, the AFT, which had asked the government to submit all files related to the selection process, set July 17 as the next date of hearing as the Government sought more time and allowed Adm. Singh to assume charge.

Army and Indian Air Force (IAF) too will see a change of guard at the helm later this year. IAF Chief Air Chief Marshal BS Dhanoa is set to retire in October and Army Chief Gen. Rawat will superannuate in end December.

The tenure for a service Chief is three years’ duration or 62 years of age, whichever is earlier.